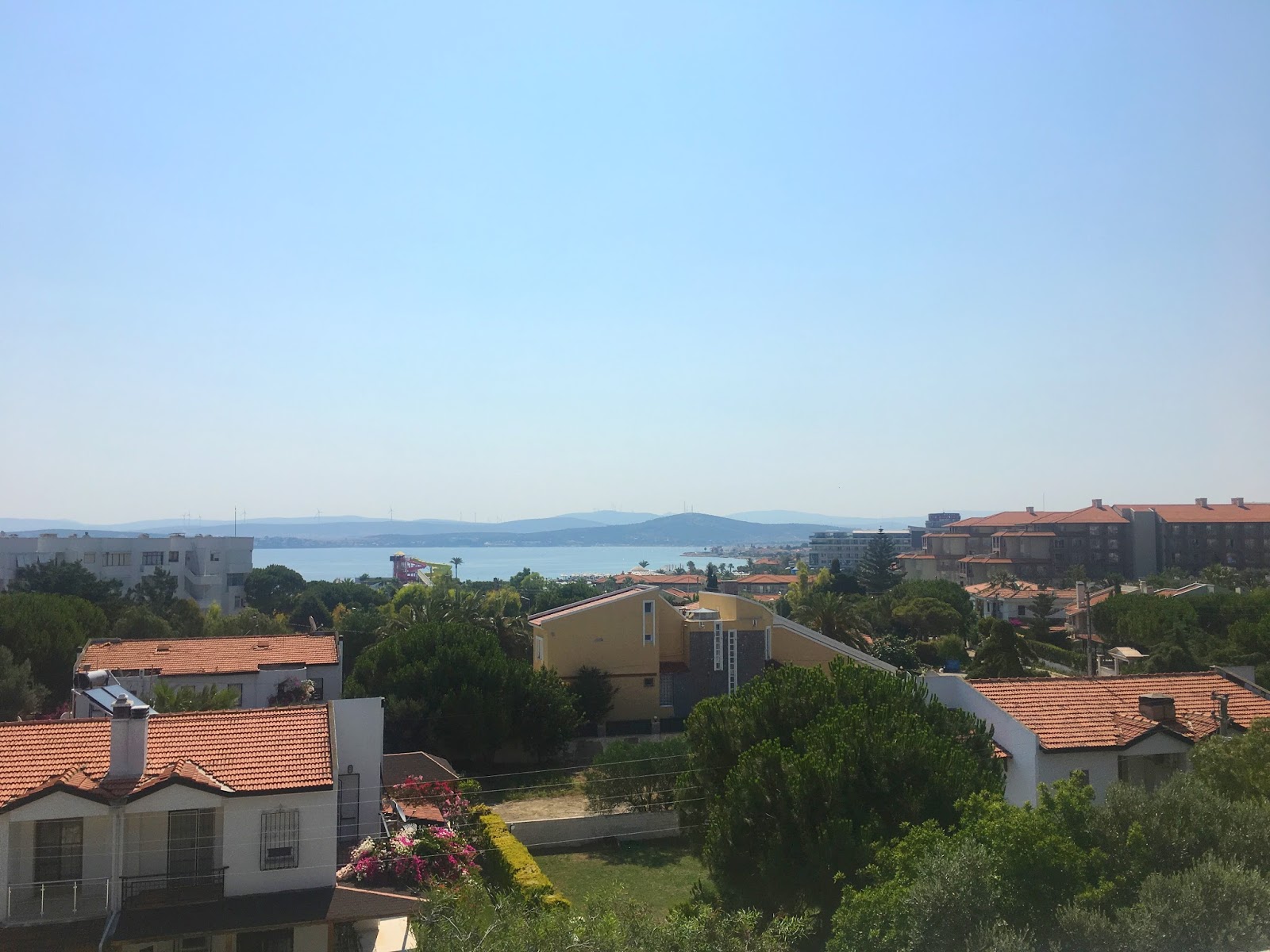 Saturday 24th June
It's 12.35pm and we're currently in the car on our way to Gatwick airport. We decided not to take the car this time and instead Dad's driving us. We'll just give him some money since we were originally planning on getting a cab. Mum's come along too - a family road trip to the airport!

Just crossing over the Dartford crossing as I'm typing. Never realised how ugly the scenery is from up here! Our flight is at 5.10pm, but not knowing what traffic would be like on the M25 we thought we'd keep it safe and leave with plenty of time. We arrive in Turkey at 10.55pm (local time) so we won't be doing anything tonight.
Not really much more to say today other than, see you when we're there :) 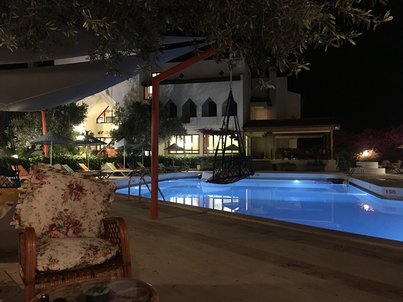 Sunday 25th
We made it :) pretty easy flight thankfully. Although the pilot must have misjudged the runway upon landing as we hit the ground pretty harsh which was a bit of a shock to everyone. It was that much of a bump, even the cockpit door flew open!
When we booked our flights, we wanted extra leg room and it turned out once we booked the leg room and luggage, we got in-flight meals for free. I have to say I'm a secret lover of plane food. Actually.. there's nothing secret about it, I tell everyone! I think it reminds me of my childhood and going away with my parents. Back then you used to get a meal on all flights unlike now. So these days, when we do happen to get a flight and food is either included, or we book it - I'm one happy traveller!

We flew with Thomas Cook and James Martin is the chef that makes their food and were given the choice between beef or sweet and sour chicken and both Terry and me opted for the beef. It was cooked just right that it flaked away with ease and came with new potatoes and carrots. Alongside we also got a roll with butter, a small stick of cheese and two crackers to go with it. Not forgetting a mini cheesecake dessert; which was so good!

We arrived at our hotel around 1 am this morning. Arriving in the dark meant we didn't see much of our surroundings last night. Waking up this morning and opening the balcony doors to see the sea was not a disappointment. It's morning now and I'm currently sitting out on the balcony while I let Terry sleep for a little bit longer. I'll wake him up after this to go down and get some breakfast.
Will leave it here and will come back this evening or tomorrow. 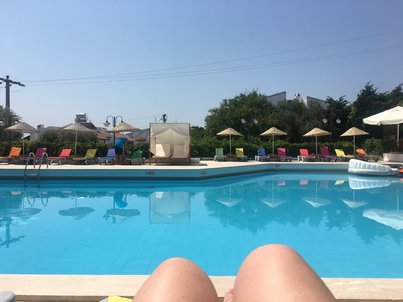 Monday 26th
Good evening! It's currently 1.30am (technically Tuesday morning). We're lying in bed, Terry's watching football and I thought it would be the perfect opportunity to get an entry done. We were asleep by about 11 last night; hence no further input for yesterday, so I thought I'd just combine yesterday and today into one. 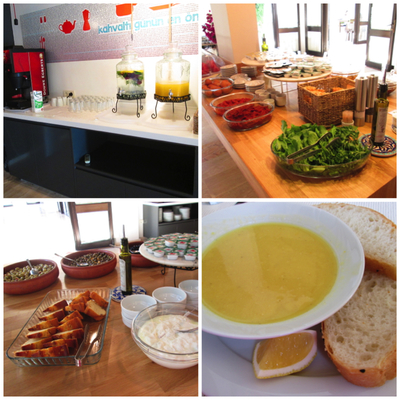 Breakfast is included in our hotel, so we headed downstairs to see what was on offer. If I remember to take my phone down tomorrow I'll try to get a few pics. There's bread, jams and honey. A couple of cereals to choose from. The past two days they've had different soup; yesterday I'm not sure what it was as I didn't have any, but today was tomato soup and it was lovely. A selection of different cheeses and two types of ham. Olives galore with different ones to choose from. Coffee, Turkish tea, orange juice and water with mint and lemon (which is lovely and refreshing).
After breakfast, we took the short 5-minute walk to the supermarket. We didn't end up buying anything other than water and cigarettes and headed back to get a seat by the pool. 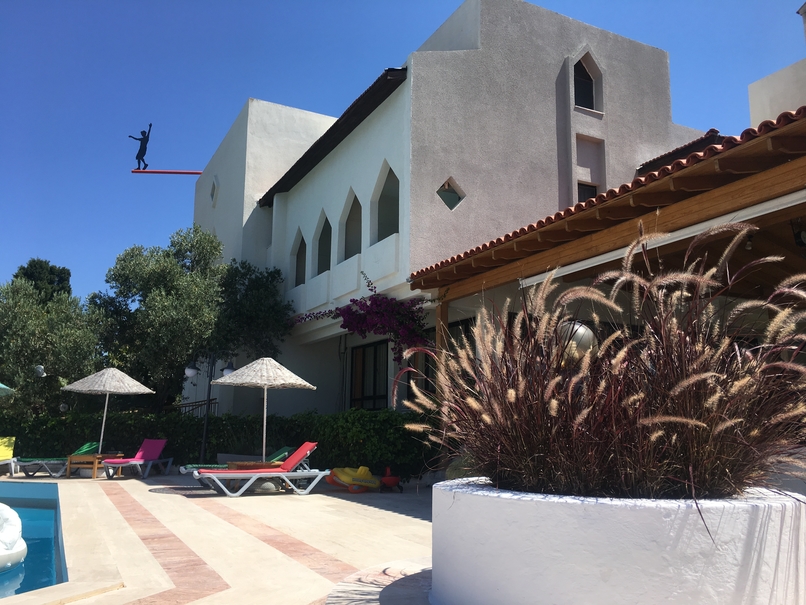 The pool was empty. No one around, so we had the hard decision of deciding where to sit. Trying to work out what direction the sun would head in and where would get the most sun. After finally deciding on a spot, we set up our stuff and we remained there all day until about 4 pm. We had the pool to ourselves the whole day. No one else came, so it was lovely and peaceful
We headed back to the room, had a shower and while Terry had a nice two-hour nap, I unpacked and sorted my bits out and got ready for dinner. Does anyone else's partner not unpack for the holiday duration and live out the case? I think I've done it once and I hated it. Can't see what you've got with you properly and it doesn't feel relaxed? Almost like you're ready to pack up and leave any minute? Or maybe I just think too much into it haha? 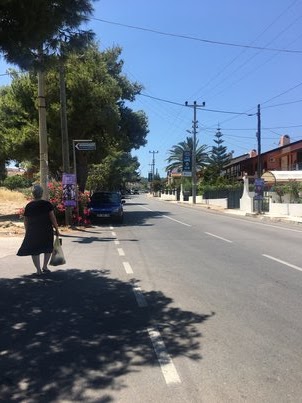 We decided to take a walk down to Ilica for dinner. We had driven that way the night before in our transfer from the airport, so I remembered where we had to go. The only problem was 5 minutes in a car, ended up being about 30-40 minute walk. It was still hot yesterday evening, so we were both sweating by the time we'd got to the little town area.
Ilica is full of locals. So much so that none of the restaurants have English Menus. After walking around for about an hour, we finally decided on a place to eat. The guy at the restaurant spoke very little English and it proved pretty difficult to order. Terry went with the classic lamb chops and I ended up ordering (without realising) pasta with beef. I had no idea what to expect, but it was actually really good. 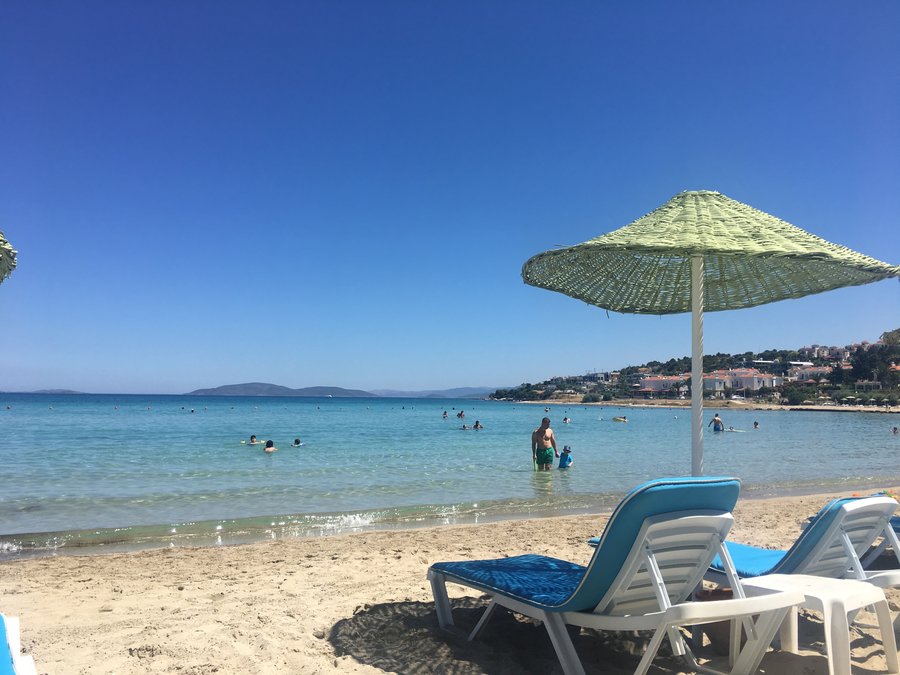 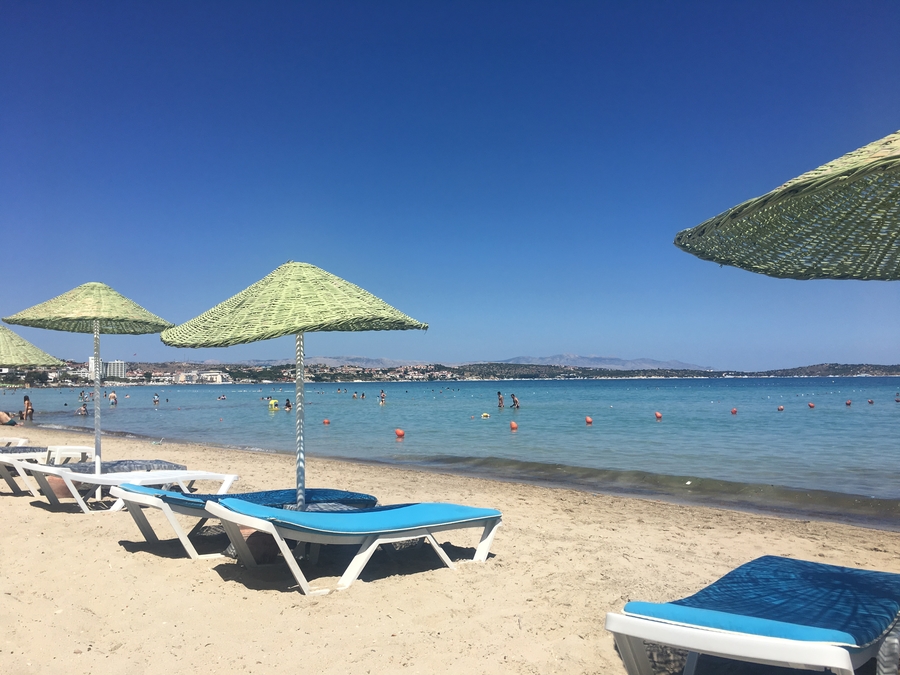 Today was a beach day. After talking with one of the staff at our hotel, we walked the short distance to one of the nearby beaches. It wasn't a huge beach, but it was clean, had sand and the water was clear. I'm so fussy when it comes to a beach. I want them all to be like the Maldives, but in reality, I know that's not going to happen!
We were able to walk out for a fair bit and still be able to stand, with the water just around the stomach area. Sandy floors and clear water meant we could see the fish swimming by and every now and they you'd get an inquisitive one come for a close look.
I bought a waterproof camera to bring away with us and although I got it working today, I haven't had the chance to read the instructions. Not 100% sure how to work it yet, so the underwater fish pictures will have to wait for now. 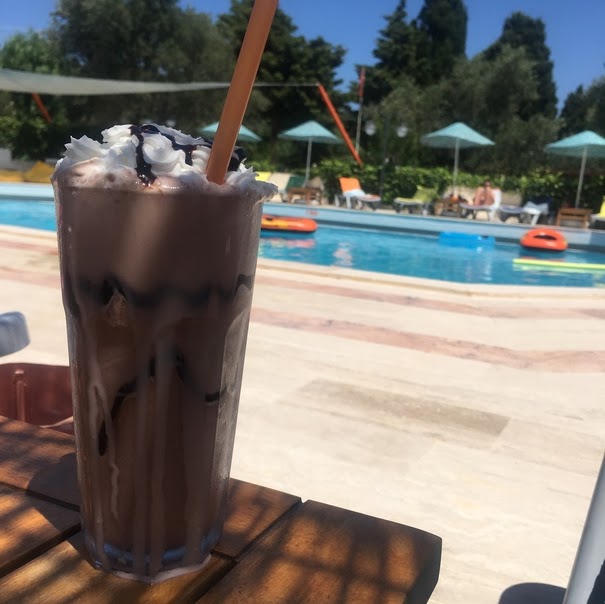 In the afternoon we headed back to grab a bite to eat and chill by the pool for a couple of hours. Again heading up to the room afterwards and this time I made sure to nap! We ended up back down in Ilica this evening. Decided to give another restaurant a try to see what it was like. Still proving difficult because of the language barrier, but we finally found somewhere that claimed to do both fish and meat selections. Although, it was a place that had no menus and it was a mezze style meal. 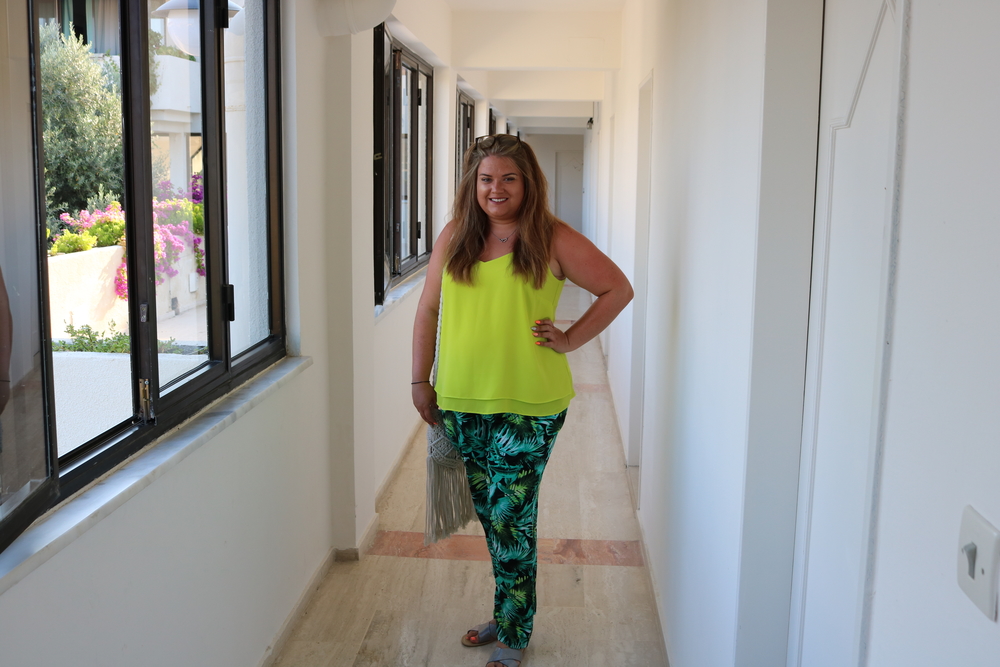 To start we had a mixed plate of dips and peppers with bread.
Next came a plate of fresh calamari which I thought was the best I've tasted, (Terry isn't keen on seafood, so he wasn't too impressed). And then finally, seabass and some kind of chicken meatballs. I've never had seabass before and have been wanting to try it for a while. It was nice, nothing overly special and I didn't like that it was whole. I don't deal with seafood that still has its head attached very well, so I didn't end up eating much after all. It doesn't matter though because we were right in the on the sea front and had an amazing view! 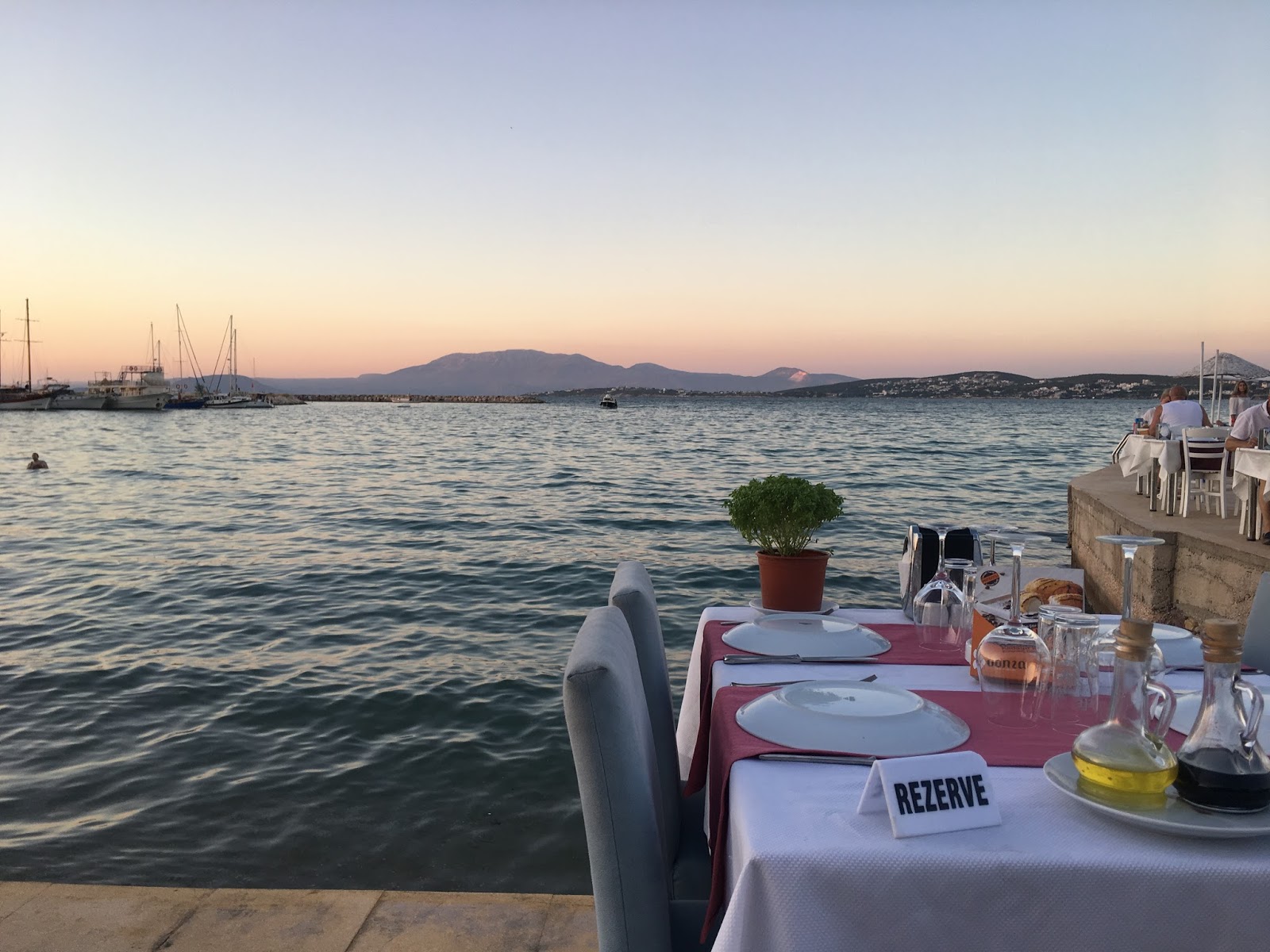 Want to see what else we go up to? I'll be uploading Part 2 soon :)