House Survey Explained | Our Surveyor Missed A Problem With The House 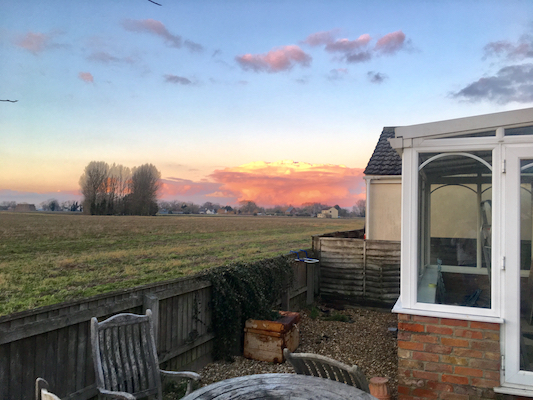 Grab a cuppa, it’s going to be a long one… When you buy a property, one of the steps you have to go through before you can complete, is to get a survey done. For those of you who are completely new to the home-buying experience and are unaware of what this is, it’s when you hire a surveyor to go to the property and they check for things like; wall structure, damp, mould, uneven floors, poor windows, double glazing and so on.
Their job is to make sure the house you are about to buy, is safe, secure, not falling down and if they do notice any problems that should be a concern to you, they’ll put it all in a report for you to look through before you move on to the next stage of exchanging and completion.

It’s important to remember that the house we’ve just bought, is an old house. I’m not sure if a survey is needed on a new build property, especially one still within the build guarantee, however, your lender will tell you more and whether or not you will need one.
For those of you buying an older house, this isn’t a step in the process you can miss out on or avoid, it’s a vital step and one your lender gets involved with. When you take out a mortgage with a bank, as your lender, it is in their best interest to ensure they are not giving you money for a house that is falling down or, is under the value of your negotiated and agreed price.

When we reached the stage where we were required to book our survey, our bank contacted us and gave us the name of the company they were currently telling their home buyers to use. Now this is where things get a little complicated and again, if you are buying a new build, things may be a little different…

There are three levels of surveys. Level 1, Level 2 and Level 3. After some research, we decided we didn’t want to go for anything lower than a Level 2because of what it covered, what they checked for and what we would be covered, should they miss anything on the report. When you borrow from a bank, they will have a surveyor company/partner, who (without choice), you will haveto get at leasta Level 1 survey from. This way, they know you’ve done as they have instructed and not just paid some random to give you a passing report in order for the bank to release the money. It’s important to know, that if you want a Level 2, it covers both Level 1 and Level 2, so you can’t skip Level 1 and go straight for the 2. If you are like us and decide to go for a level 2 report, you have two options, (prices below are for example only):
1)    Pay £300 for a Level 1 report from the company the bank has instructed you to use. Do your research and find another trusted, good reviewed surveyor company to carry out a Level 2 report. Pay the second company £700. Total spend = £1000.
2)    Pay £500 for a Level 2 to the company the bank has recommended and save yourself £500.Total spend = £500

When we received the name of the company the bank was telling us we had to use, I did some digging online and naturally, wanted to check out reviews. Amazingly, they were awful! Hundreds of reviews, all negative, all of them telling people to avoid the company at all costs. Many people were saying that like us, they had no choice but to use them because of their bank, but the surveyor had missed issues that they were now having to pay to get fixed themselves.

Straight away I emailed our mortgage adviser, sent over numerous links to where the reviews could be found and asked if there was anyone else we could use. As expected, he came back to me ignoring the concerns and the negative reviews and in other words, said no.

By working out the figures, to us, it was a no-brainer to go with option 2 from above. It’s a bloody expensive time as it is buying a house and surely if the bank is recommending someone they can’t be as bad as the reviews say they were? I thought if I emailed the company outlining my concerns to them, they’d be extra vigilant? At the time, as naive as we may have been, saving £500 was more important and we went ahead with a Level 2 from the company the bank had recommended.

Surprisingly the report came through via email, the day after the surveyor went to the house! We were able to look through it thoroughly and it made us so happy to know there was no major works that needed doing. The house was in good condition and had an overall pass. 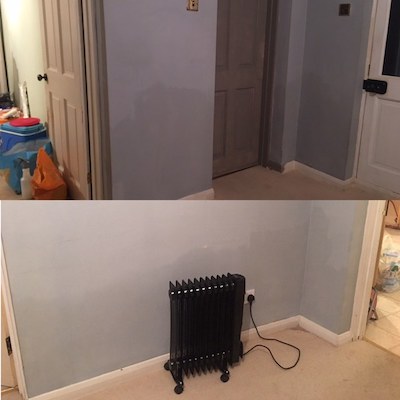 Skip ahead a few weeks, on Monday November 26th we completed and I went to collect the keys from the agent. That following weekend Terry and I went to the house for the next two weeks, we planned on repainting and doing what we could to get most of it finished. He had taken the two weeks off and I was off for about six days.

On our first day there, 1stDecember we started going around filling holes in the walls... It wasn’t until Terry pointed out that one of the walls felt damp, that we realised the hall and front room had damp coming up from the bottom of the walls. Turns out, we had rising damp.

Thankfully, I hadn’t deleted the photos from our very first viewing and it could clearly be seen in the photos, (once you know what you were looking for). Meaning it was an issue back in September when we viewed, it was an issue when the surveyor went in October and was an issue now in December! The surveyor had somehow missed the obvious signs, someone of his profession should have spotted a mile off. 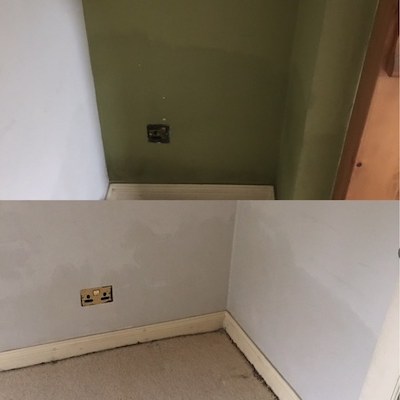 A few weeks ago, we finally had someone in to fix the damp. I found them through Check A Trade and read good reviews before committing to anything! (British Waterproofing, thank you, you guys were brilliant and we were so impressed with the service you provided).

The plaster had to be removed in two rooms 1.2 meters up from the floor level. They had to inject the walls with a damp proof chemical and re-plaster the walls. The skirting boards were rotten from the damp, so those had to be replaced in both rooms. The carpet also had to be removed, as that too was starting to rot underneath from the damp. We were just originally going to hire a carpet cleaner, but the condition of it meant it had to go and we’ve now got carpet being fitted at the end of the week.

From 3rdDecember when we first contacted the surveyors about the damp, still today we are fighting the issue. Lucky for us, we had those photos to prove it would have been there when the surveyor went to the house and they’ve admitted it was their mistake for not noticing it when it should have been picked up. They have since attempted to make two offers which we declined and now have someone taking over the case for us. We’re leaving it up to someone who knows what they are dealing with and do this sort of thing for a living. 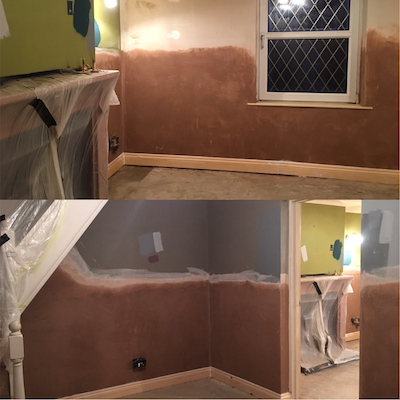 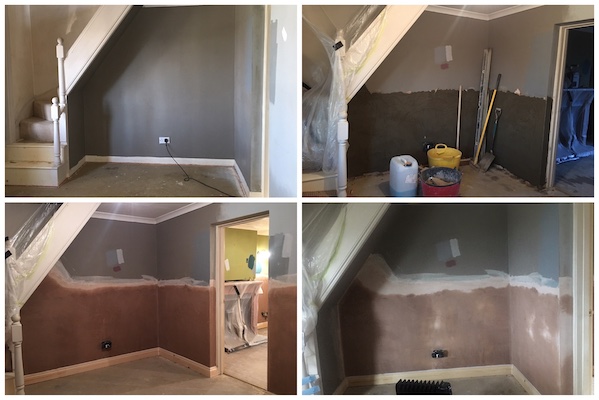 It’s now March and we’ve still not moved into our home. We are keeping everything crossed that by the end of the month we’ll be in a position to start moving bits in, along with ourselves shortly after. The whole house-buying process for us, has been a nightmare. We had problems with our solicitors with lack of communication and then over-charging us at the end with their invoice. Thankfully we got £500 back off them, but that took about a month to resolve and now we’ve got the case with the surveyors. I’m just glad we stood up for ourselves, didn’t back down and are hopefully going to get what we deserve back, as we did with our solicitors.

Please keep your fingers crossed for us and hopefully, the next post will be because we’ve managed to complete a room and I want to share with you what we did and not because we’ve come across another problem.