Thursday, 20 October 2016
Over the weekend, I uploaded part 1 to this post. Because it ended up being a longer post than I originally expected, I decided to split them into two. If you haven't already seen Part 1, you can find it HERE. Be sure to go and see what my first four choices were.


A show that had me hooked from the very start was Orphan Black. I am so gutted I have to wait until April next year to see season five! Argh why are you doing this to me? I don't want to say too much in case I give anything away. But please just trust me. Its amazing. Its crime mixed with science, mixed with thriller and its just soo good, with a lot of look-a-likes ;)
My favourite has got to be Helena. Her character is great and it's really hard not to love her!

I stumbled across Helix while looking for a new show to start watching. After reading the description, I wasn't too sure if I would get into it, but I was pleasantly surprised. I am so gutted the show never made it past season 3. Although to be honest, the first one was a lot better than the second, so maybe I can kind of see why. Either way its a good programme and even if you don't watch the second season, you should definitely watch the first. A disease breaks out, in a top secret lab in the Artic. A group of scientist go to see if they can get it under control and unwrap hidden secrets along the way. 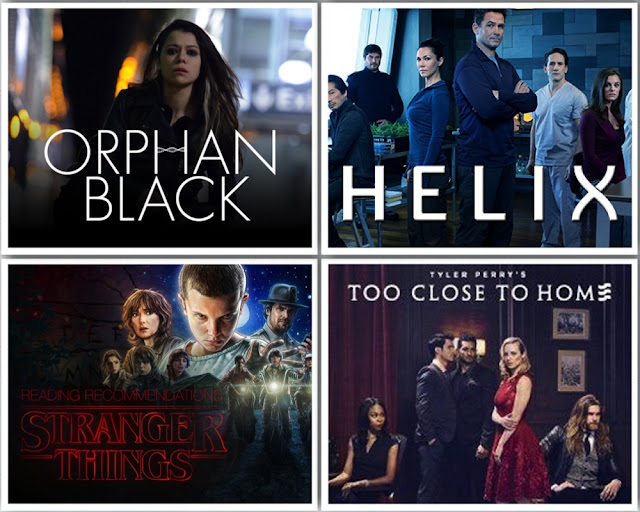 One show that I started watching, thanks to the power of Twitter and seeing all you other bloggers talk about it, was Stranger Things. When this was released back in July, everyone was going crazy about it. I decided I wanted to see what I was missing out on, so started watching it myself. I have to be honest and say at first I thought everyone had gone mad. All I was seeing was a dated 1980's type show, with a really unrealistic storyline. But by later that evening, I had already watched the first four. It might have been cheesy and unrealistic, but it had me hooked and I couldn't wait to watch the next one, to find out what happened. A boy goes missing and gets taken into the underworld where this "thing" lives. Don't even know what to call it. A science experiment gone wrong? Again I don't want to say too much in case you haven't seen it, but go see for yourself. Hopefully you'll understand where I'm coming from then?

Too Close To Home is a new show. It started back in August, so great if you want to watch something "current". Poor Anna has no choice but to return to her trailer park home, back in happy Alabama; once the truth about her affair with the president is released. Currently waiting on the 6th episode to come out, so don't really have too much to say about the show just yet. It's okay. Not the best I've seen and if something better come along, I think I'd forget about it to be honest. Who knows, maybe that'll change after I've seen a few more. Just can't seem to get into it fully yet. Maybe its the slow storyline, or the poor acting from some of the cast?

So thats it. Now you've seen PART 1 and part 2, you know what shows have had me hooked this year. When you think about all these shows, how many series are in each of them and then how many episodes are in each series... I seriously have way too much spare time.

As I mentioned in part 1, I am in desperate need of some new recommendations. So please if you do have any, send them my way.
"Hi my names Hannah and I'm a TV addict"!!