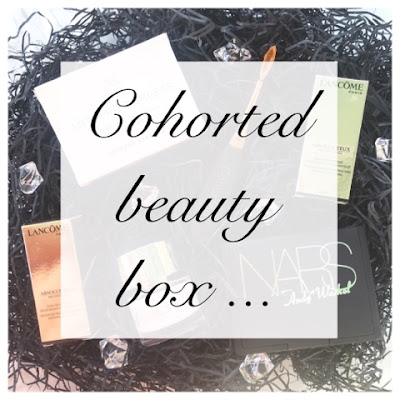 Subscription boxes have been around for ages and I'm sure you're all well aware of that? Since I started blogging last year, I've seen more of them pop up and have got to know about ones I had never heard about. One in particular that caught my eye, was by a company called: Cohorted.

Now my dislike towards the idea of a subscription box, comes from not knowing what you are getting in the box until it arrives!
Will I use the products in the box?
Will I be happy with what's in the box?
Do you really get value for your money?
After doing some research and keeping an eye on the Corhorted box over the period of a few months, I began to to find myself saying YES to the above questions. The idea of splashing out on £35 to receive over £80+ worth of high end makeup products, really had me hooked and I knew I had to try it for myself! 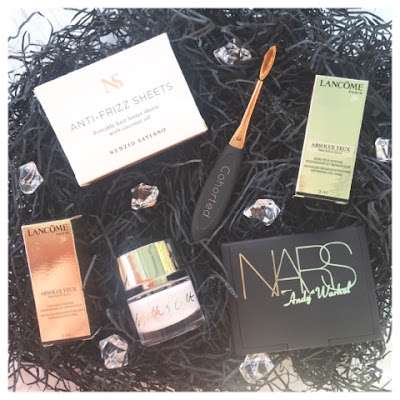 The good thing about this particular brand, is that you are not tied into a yearly subscription. You can cancel at any point, meaning you can sign up to one, two, five, or how ever many months you wish.

With August still being classed as "summer", I thought it would be the perfect time to treat myself and to see what pretties they offered their customers in summer. Bright lipstick that I wouldn't usually pick for myself and maybe a nice bronzer to give me a glow, came to mind..

Unfortunately this wasn't the case! From looking at posts and images from previous boxes and seeing regulars saying the same thing, August's box was a bit of a let down! Let's take a look and see what we got shall we?.. 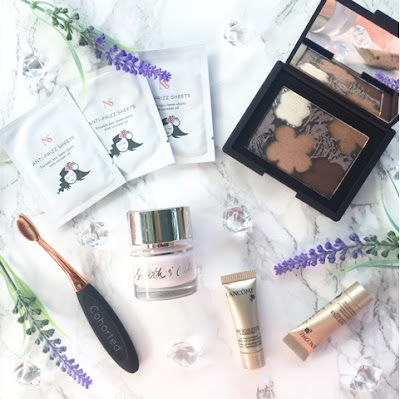 Inside the box, you get 15 individually wrapped packets. A good amount I guess if it's something you need! I don't really suffer from frizzy hair. If anything, my hair gets greasy pretty quick and I'm currently training it, so I don't need to wash it every day, or every other day!
These frizz sheets contain coconut oil, which will definitely make my hair gross at just one stroke. Something that I'll unfortunately not be using myself and have decided to give a couple away in my 1000 Twitter follow giveaway*, to see if the winner will be able to put them to good use instead.

LANCÔME PARIS EYE CREAM
x2 sample bottles!! Yes that's right, not just one sample bottle but two! Where's the need for that? Was the product that bad it never made it to a bigger size, or just that Cohorted had so many they thought giving us two would make up for not having something else instead?
While my initial impression is that I am not overly impressed, I will be trying out this eye cream. I'm interested to see if it's any good, so will let you know when I know! 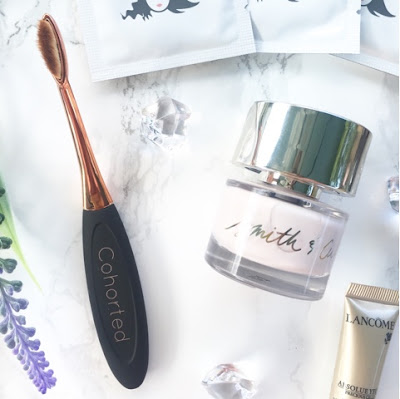 Now I'm not 100% sure what this brushes use is to be honest. I received a little booklet with the box, with all of Cohorted's new brush range is in, explaining which one is what. But the one I received, looks very similar to two in the book. It's either the crease blender brush, or the sculpt and contour in small. The more I look at it, it must be for my eyes because of the small size. The design itself is very eye catching and of course you can never go wrong with the copper/rose gold theme.

SMITH & CULT NAIL VARNISH
The RRP for this bottle is £18!! The lid is the heaviest part of the bottle and when I tried the colour out, the first coat was very thin and streaky. Not something you'd expect from the price tag. Don't get me wrong, the colour is nice (bit of a safe colour to have chosen if you ask me), but as someone who get their nails done in salons most of the time; I think I'll stick to my cheaper choices :) 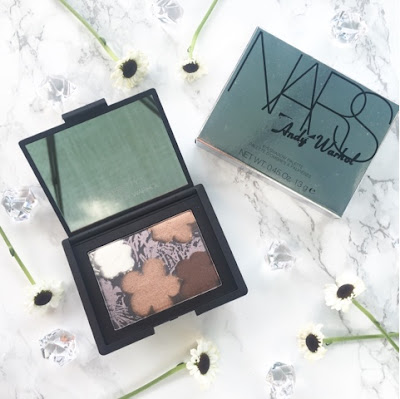 NARS EYESHADOW PALETTE
Last but not least, is this eyeshadow palette from the Andy Warhol collection, from NARS. My original one unfortunately got broken in transit, but Cohorted kindly sent me out a replacement ASAP. In a way I'm happy the first one was damaged, as it meant the replacement came in the box packaging, whereas the original one didn't.
It's a bit of a weird palette in my opinion. All colours are in together, making it slightly harder to get the one colour you wish to use. The design is pretty, but for me; I definitely prefer my shadows to be individual rather than mixed. 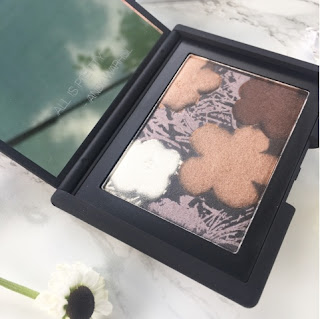 When I signed up, I signed up for August and September, so ill be interested to see what goodies next month's box holds. As for an ongoing thing, I don't think I'll keep it up. Maybe just every few months when I fancy a treat. I do plan to sign up to their December box, in the hope it'll be filled with lots of goodies :)

Have you ever tried Cohorted? Or how about another subscription box? Would love to know what ones you're loving!