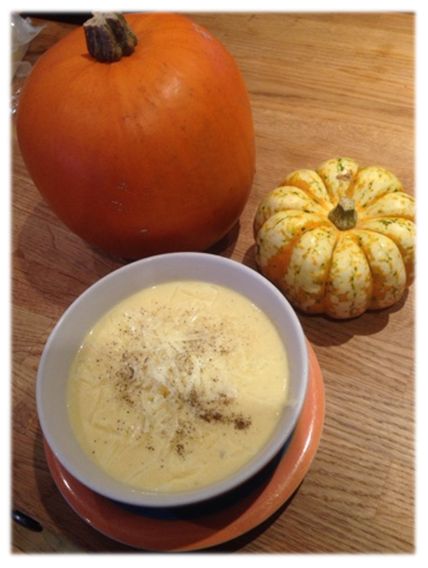 So with Halloween coming up, supermarkets are full with pumpkins at the moment and for me, that means it soup time!!.:)
It's that time of year when October comes around and you know it's definitely the colder weather from now on and you're in need of something warm and tasty to make you feel all snug inside.

Now every year I seem to forget just how hard scooping out a pumpkin can be, but this year I was clever! So when "the boyfriend" asked me to make soup I told him I would, but only if he did the scooping. I did (kinda) warn him beforehand, but as he has never done it before he straight away agreed to it and (like all blokes I'm sure), didn't think too much of it. Well put it this way, 3/4 of the way through the pumpkin he wanted to just bin the rest rather than carry on!! These men never listen to us women do they ;)
*If you're wondering at all, this soup can be made for vegetarians. The only thing that may not be suitable for some, is the dairy based products.* 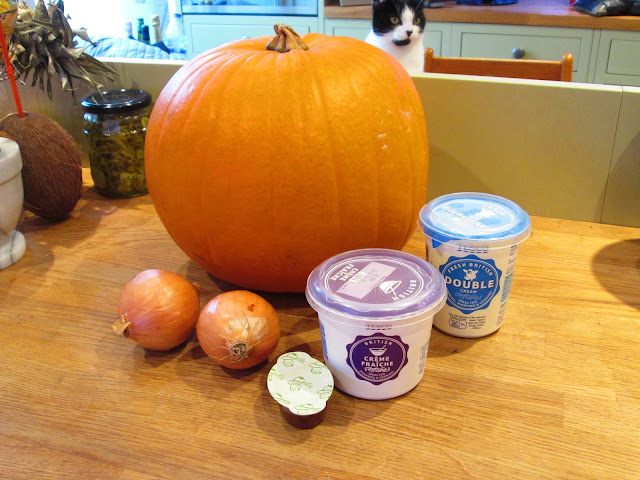 Ingredients
* Pumpkin (I used one large one, but 2 or 3 smaller ones may be more "manageable" to scoop)
* Onion x 2
* Vegetable Stock
* Approx 700-800ml of water (each stock will tell you the recommend amount to use with that particular pot/cube)
* Cream 200ml (single or double)
* Salt and Pepper to taste
* Optional: sour cream or creme fraiche and grated cheddar for topping

So first is the dreaded "scoop"! You want to cut the top off and scoop all those seeds and stringy bits out. If you're not planning on keeping the pumpkin after for carving, it may be easier to cut open yours and do it that way? Here's a blurred photo of the other half doing the dirty work for me :) 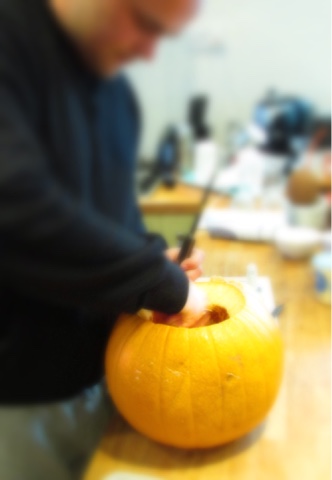 If you're lucky (like me) and have someone doing that first part for you, then you can get straight onto this step. Peel and dice your two onions. Now I cannot express how much I hate working with these nasties!! No matter how hard I try not to, I always end up looking like I've just watched the saddest movie ever. So to make it (slightly, didn't help much) less painful after I peeled mine, I cut them into four chunks and stuck them in the food blender to cut them all up. 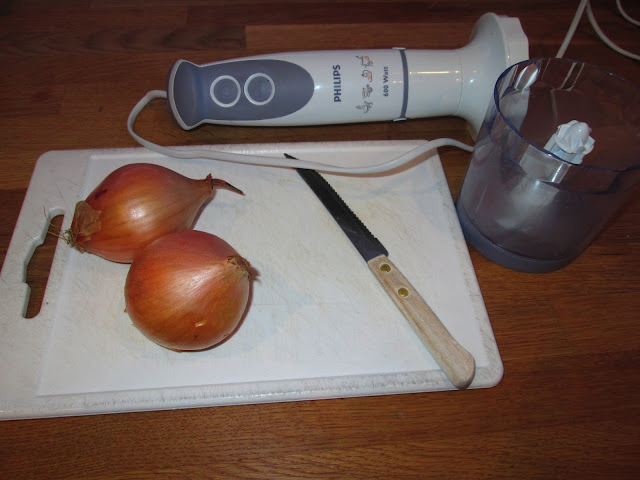 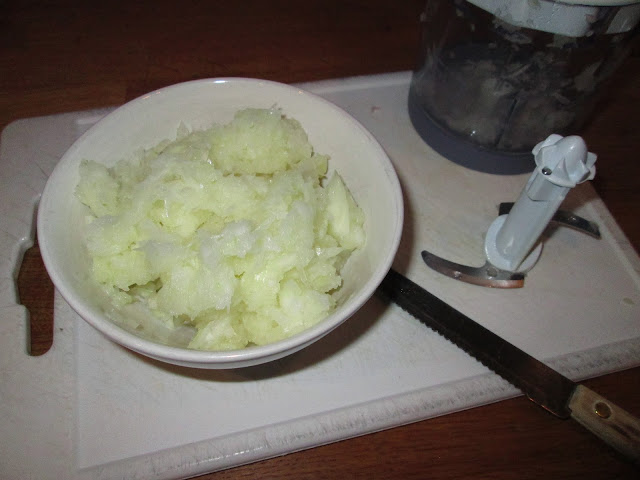 Now I never measure my oil, but it's usually pretty easy to judge how much you need. Just pop a little in a saucepan (enough to lightly cover the bottom) and pop in your onions. I let mine cook on low heat for around 5-10 mins (depends on the cooker you're working with). But basically just until they have slightly cooked and softened. 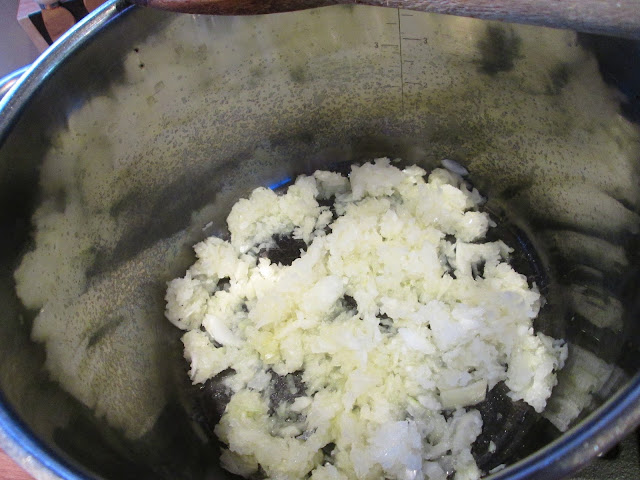 Once your onions have softened, you can now throw in your pumpkin. I just cut mine into chunks, so no need for equally measured sizes or anything like that. Again depending on the temperature; mine was on a low/medium heat and took around 10 mins to partly cook. You'll want to check the pumpkin every now and then and give it all a stir to ensure it all gets cooked and not just the bottom pieces. 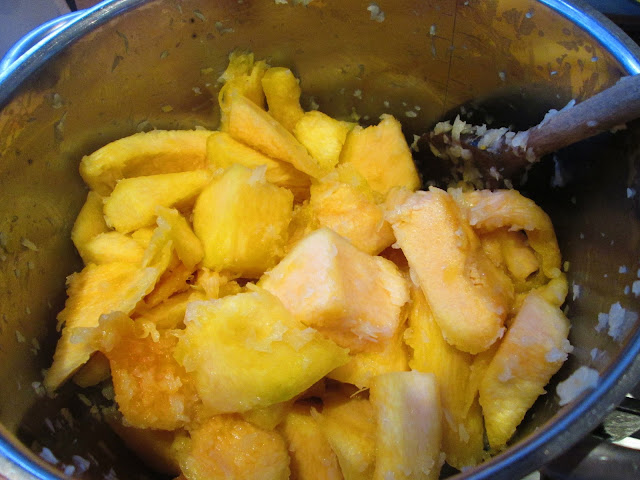 Now your pumpkin's started to become softer, make up your stock and water and add that to the pan.
You will know when it's ready, as like carrots, it'll be easy to stick a knife or folk into the pieces with force. For this step I think mine only took a further 10 mins until it was all done.

Using a hand blender, blend it all together! At this point you can either turn the heat down as low as it can go, or I turned mine off and just left the pan on the hot ring. Add in your cream (I used double, but single is also fine) and stir it altogether. Add salt and pepper to taste. 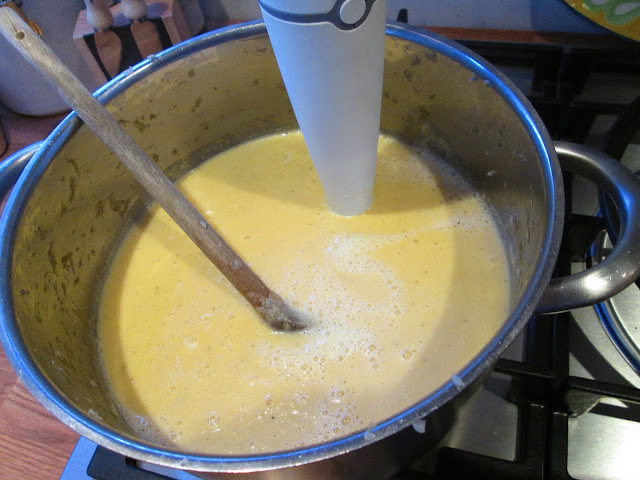 Optional step: You can either finish it there, or do as I did and add in around 3 (heaped) tablespoons of sour cream or creme fraiche. I used CF, but SC will give it a more "cheesier" taste, so wish I had some of that instead.
If you'd rather not add it I to the soup, then just serve it up and add a "dollop" into your bowl. If you're using CF it will be a dollop, at least if you opt for SC you can make it look a more appealing with a nice pattern!

And finally I grated some cheddar cheese and sprinkled some on top. 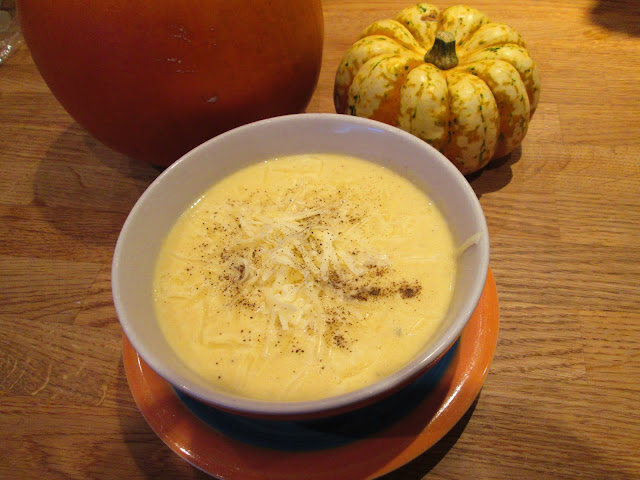 There you have it! It is such a simple recipe, but tastes really good. Once you minus out the scooping, it's not really time consuming either. If you decide to give it a go, please do let me know how it turned out :)