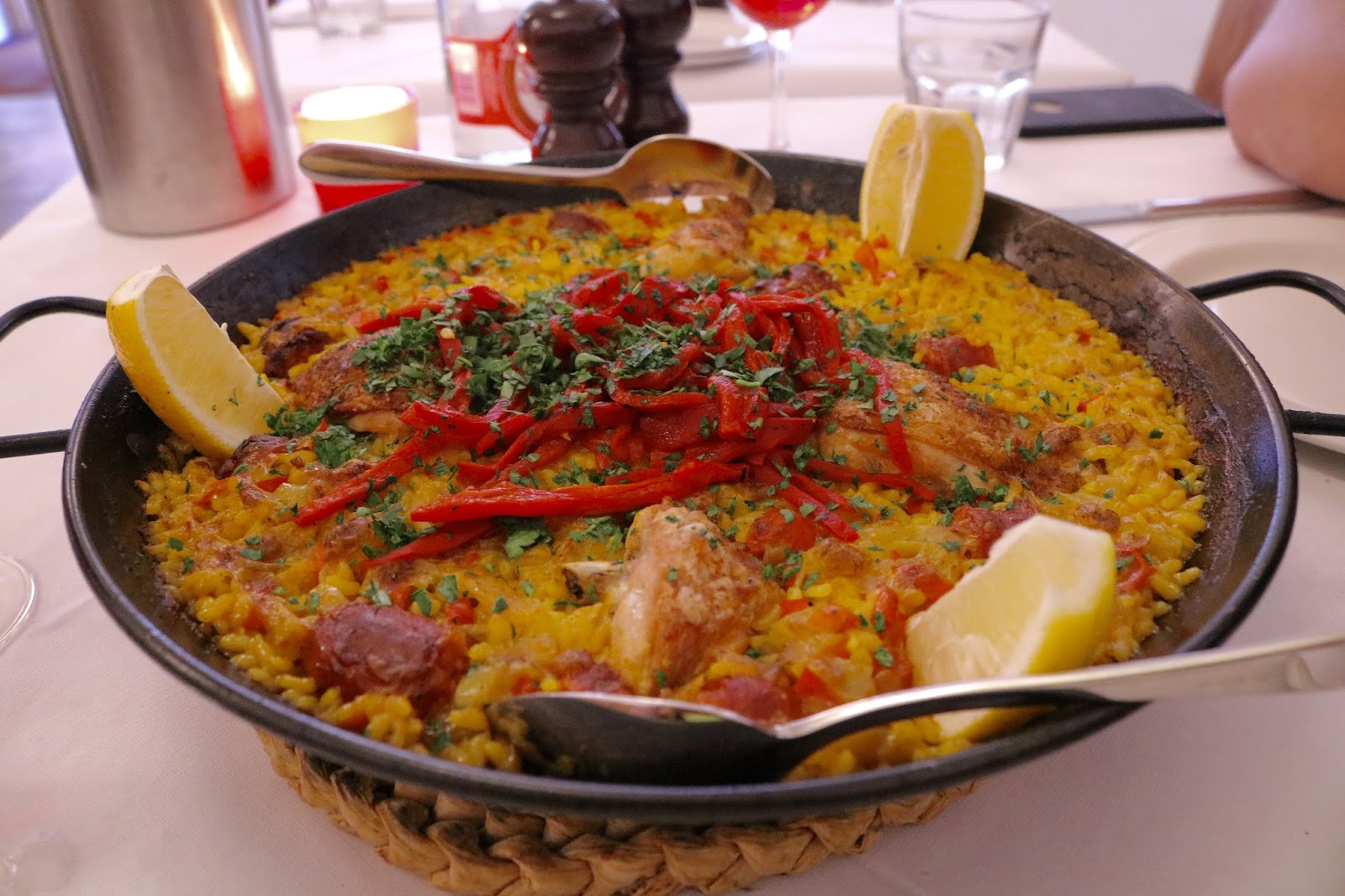 When I received an email asking if I'd like to go along and try out a restaurant in London, I jumped at the chance! I love tapas and Spanish cuisine and very rarely go out for a meal at a Spanish restaurant. I thought it would be a great opportunity for me to try and show Terry what we were missing out on all those times we go for an Indian or Chinese, instead of trying something new. 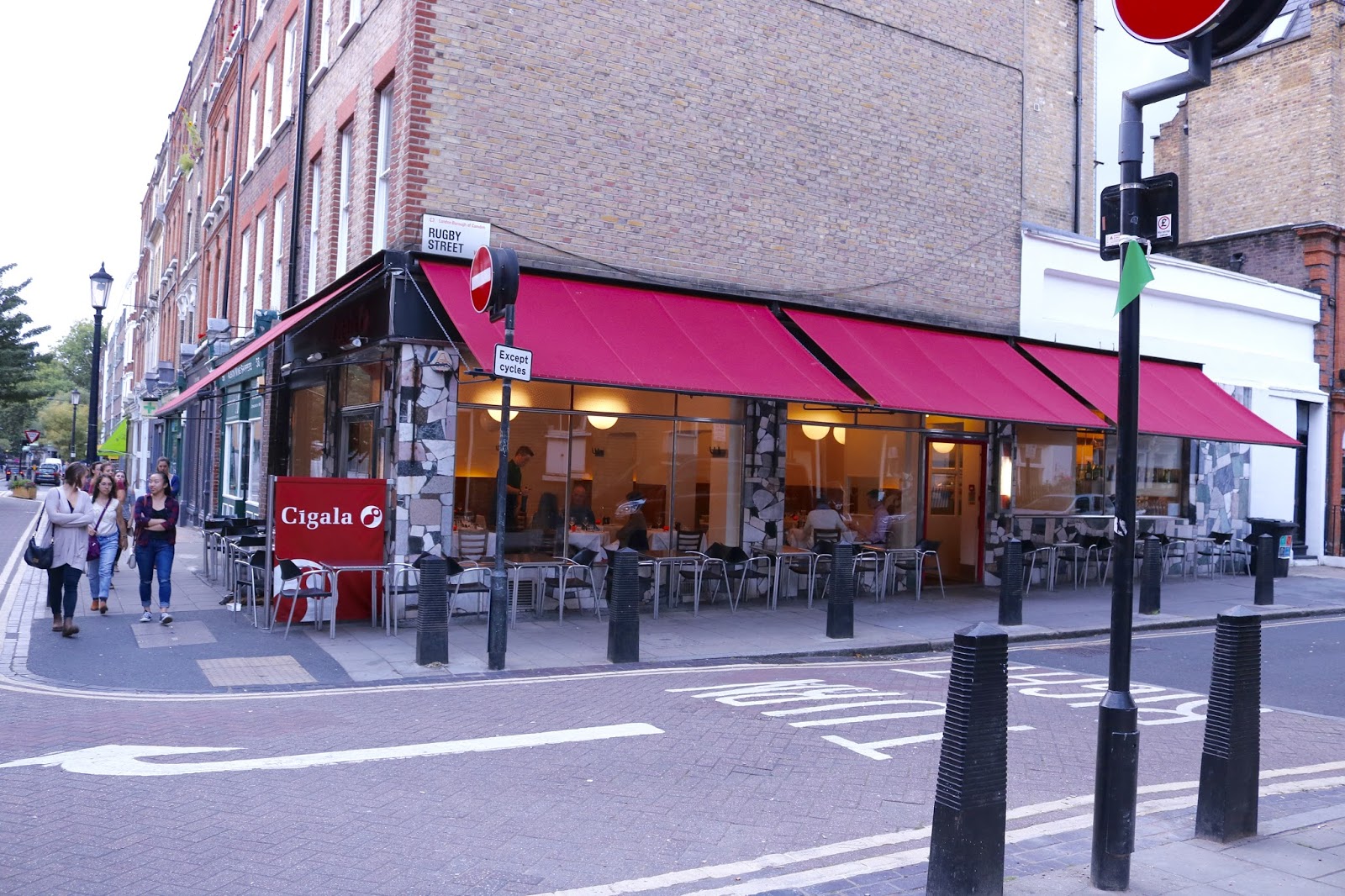 Cigala* is located just minutes from Russell Square in London and down the road from Great Ormond Street hospital, along Lamb's Conduit Street. It sits on a corner surrounded by a parade of small independent shops and cafes. Although there isn't much space, I think it's always a bonus when somewhere has the opportunity to have outdoor seating.

When we arrived we were first greeted by a young waitress who didn't really say too much to us, so much so that once we were seated and handed the menus, I felt like I had to mention the review and ask if there were any restrictions to the menu, just to make sure she knew what we were there for. To be honest, she left about 15 minutes into our meal, so it became clear she was obviously at the end of her shift and couldn't wait to leave for the evening.
With only one other couple inside the restaurant, we were not short of selection with where to sit. I initially chose a seat near to the window for natural light to help with the images, but after realising the table was wobbly and the table next to us uncleaned, we asked to move. It was as though they were very unorganised and unprepared for any customers because a few of the tables had dirty tablecloths on them still from lunch earlier that day. 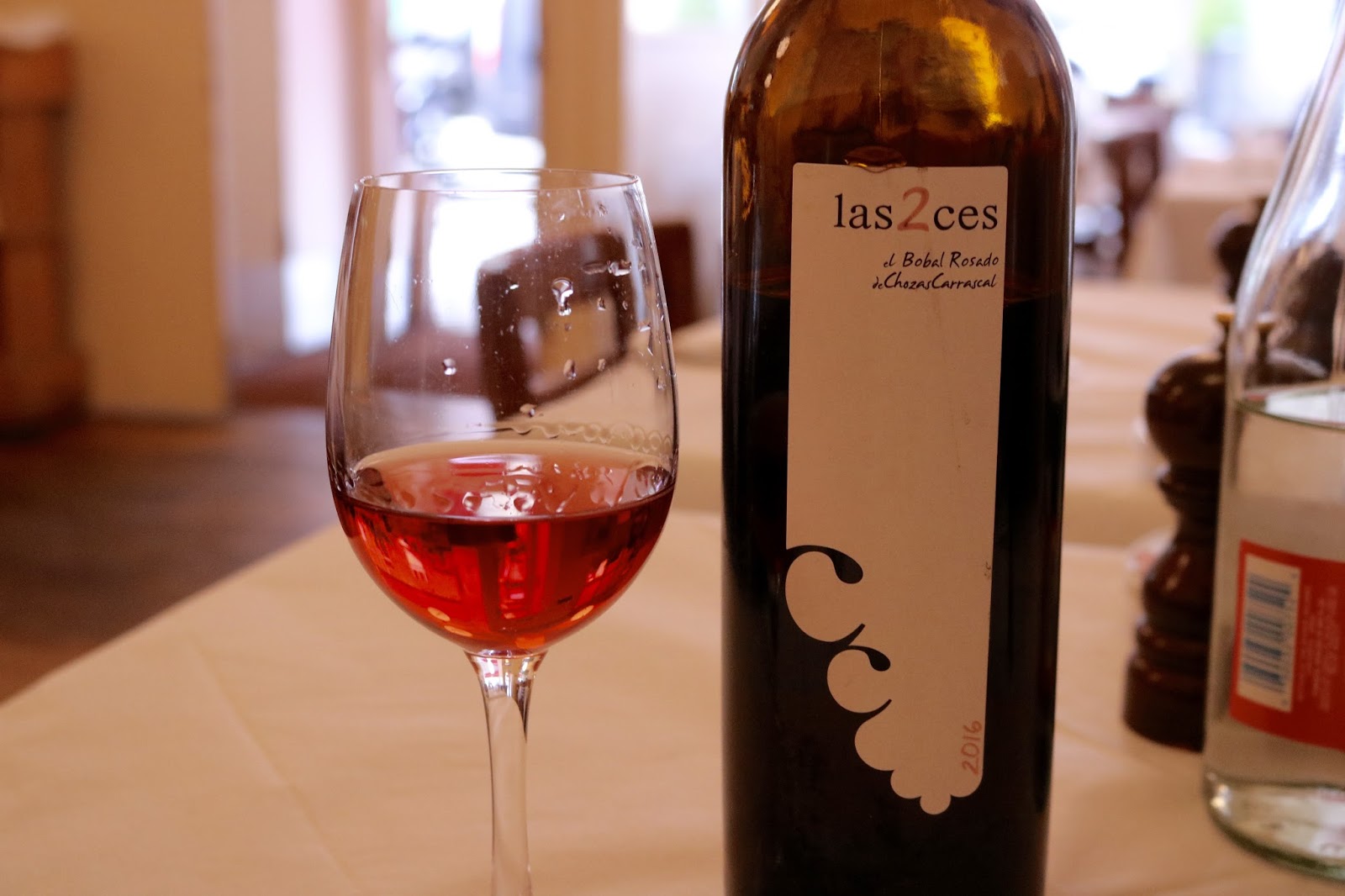 After looking at our menu which was printed on a piece of A4 paper, we selected a few tapas dishes to share for starters.
We ordered: mixed olives (£4.50), toast with olive oil tomato and garlic (£5.00), scrambled eggs with chorizo and red peppers (£6.70), grilled squid with mojo verde and pickled peppers (£10.50), and spinach with raisins and garlic and pine nuts (£6.00). 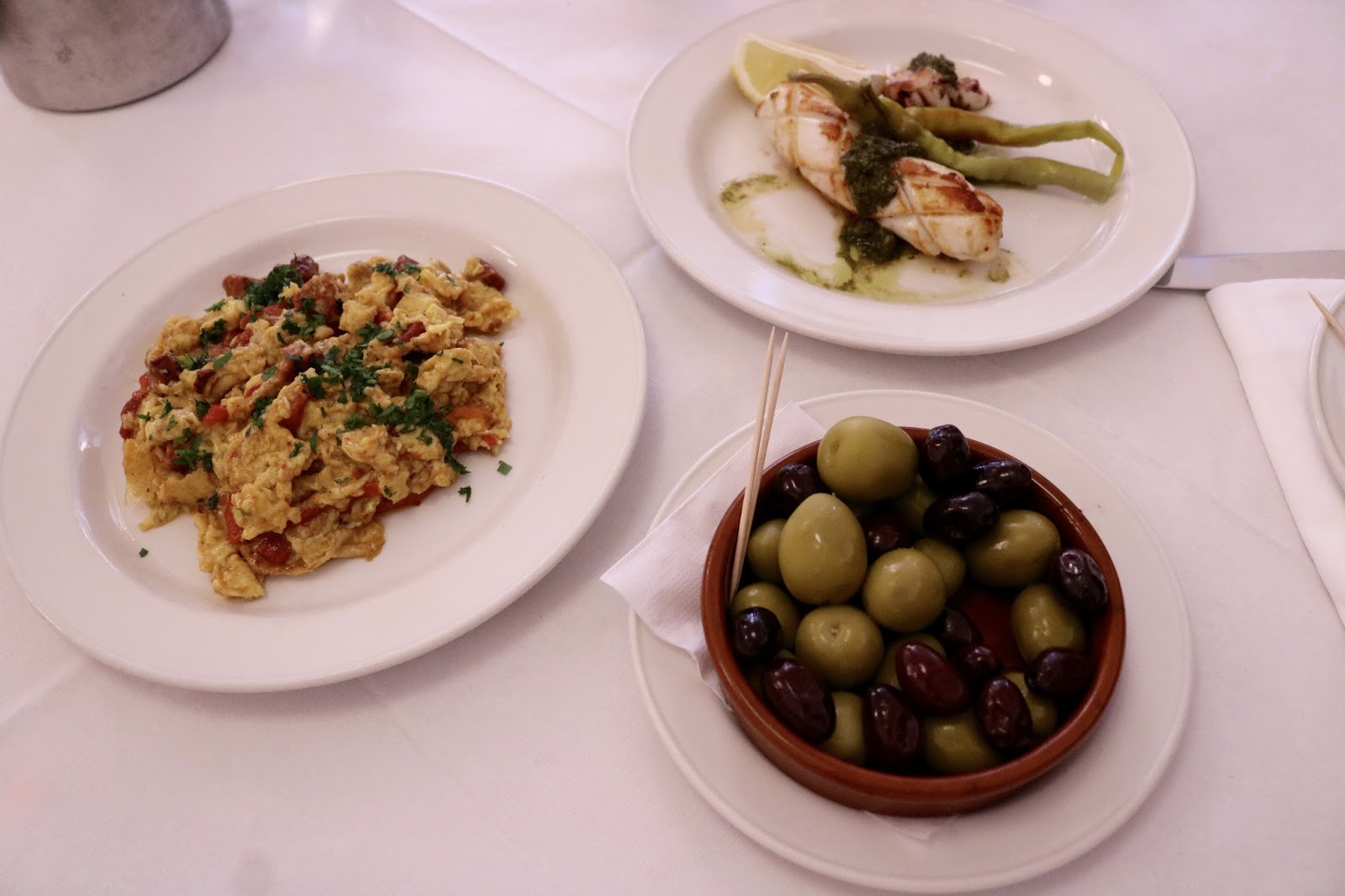 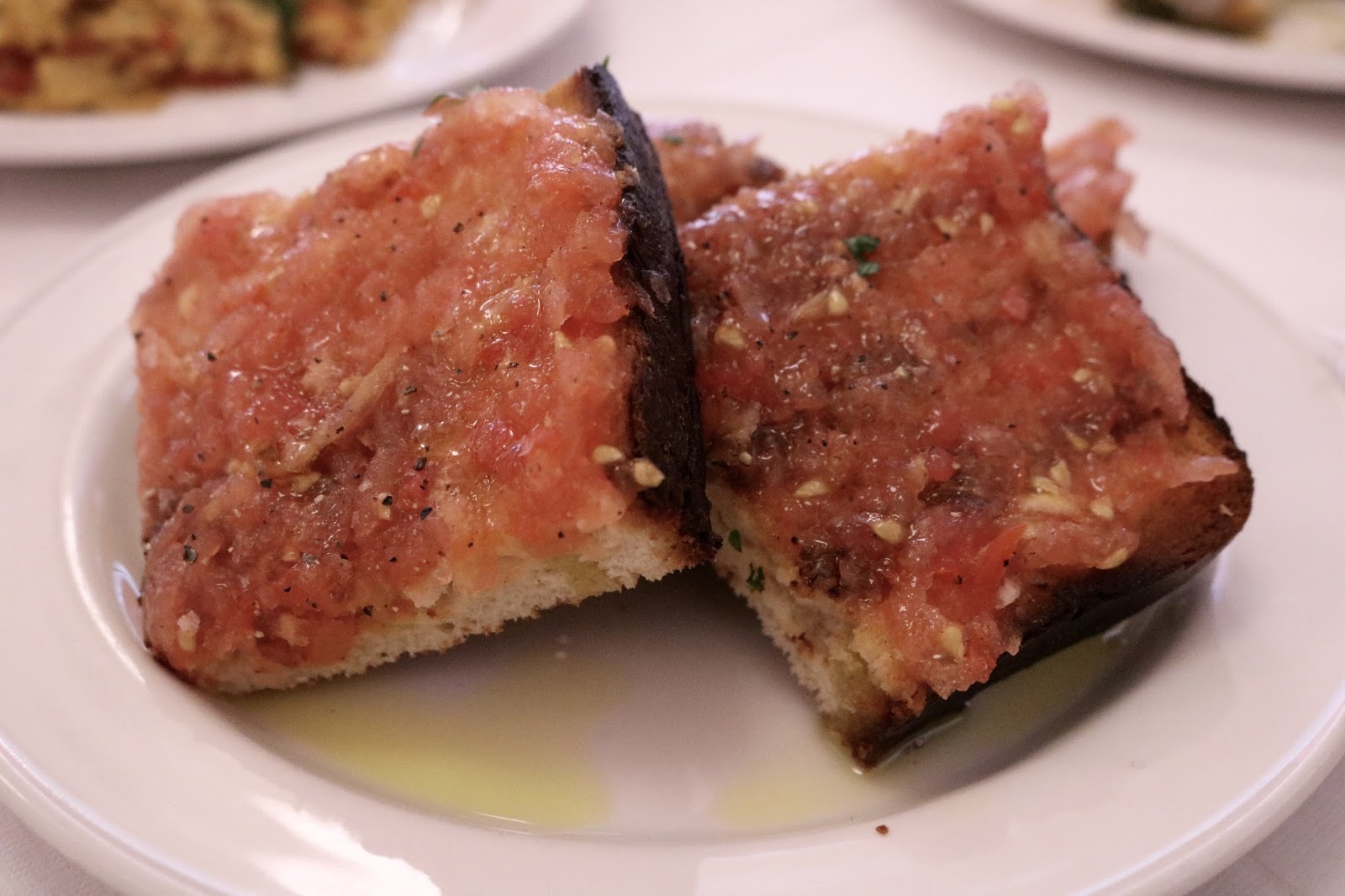 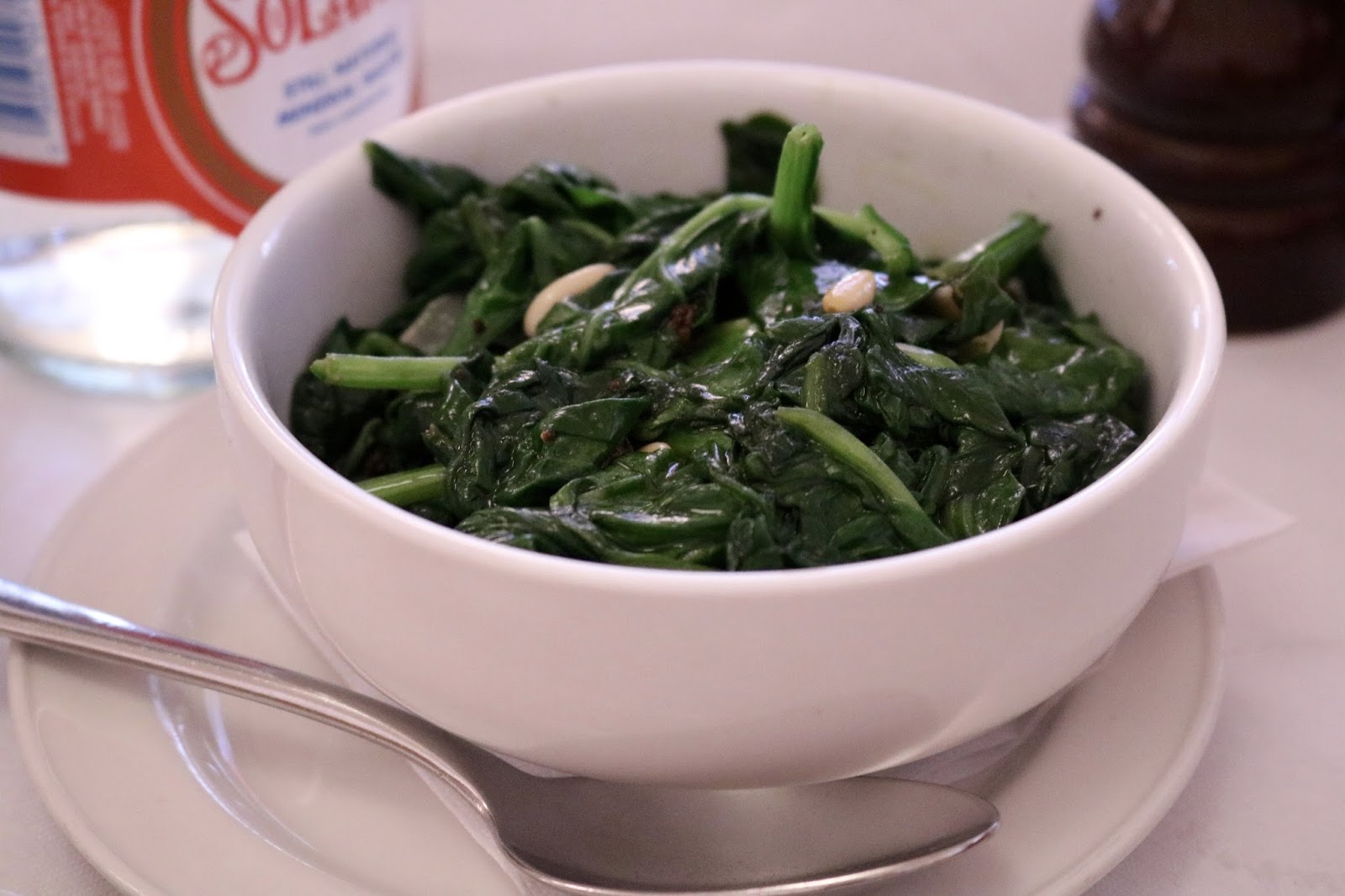 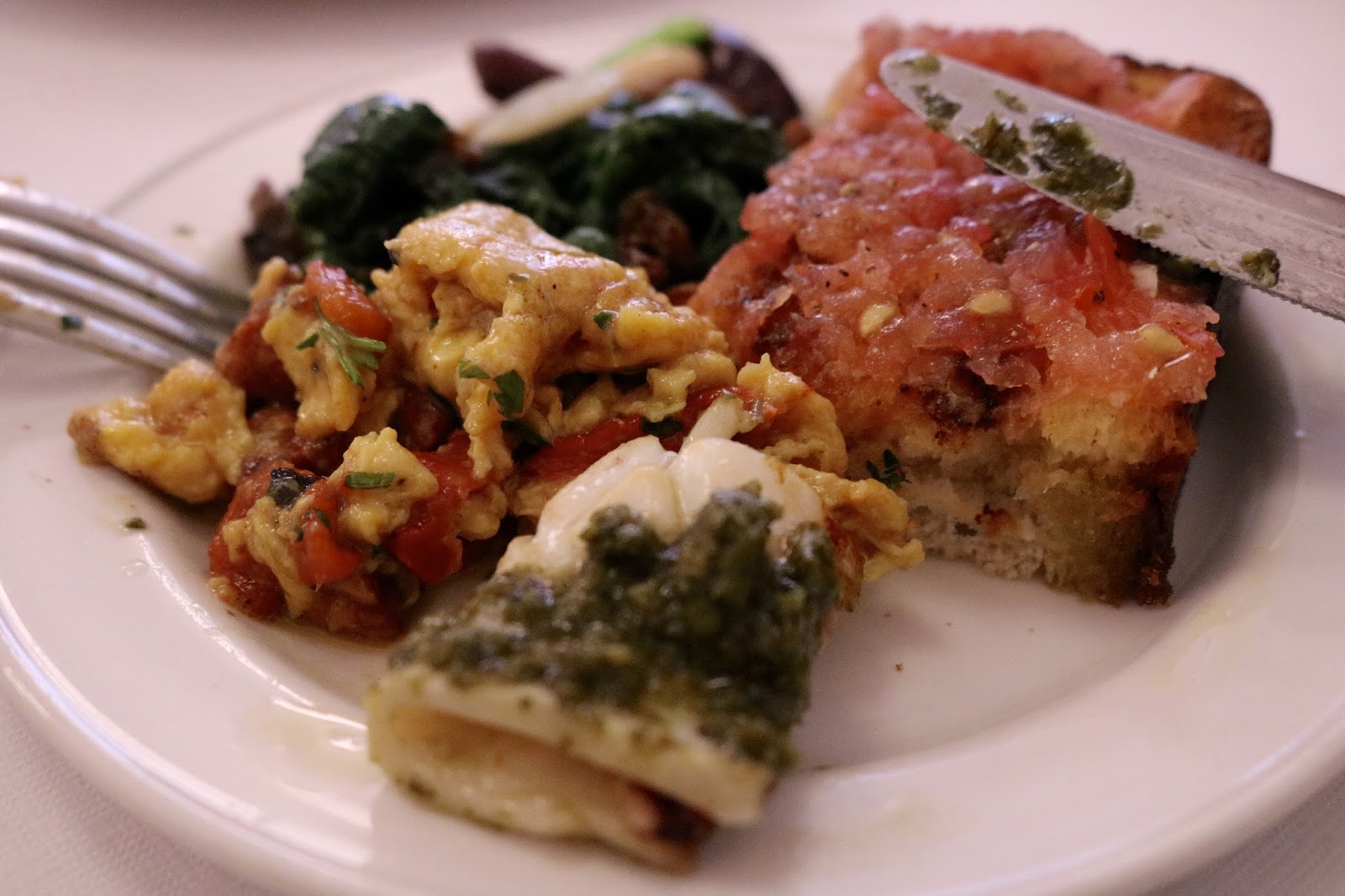 The best part about the starters were the olives and I would possibly say the scrambled eggs too. The toast was burnt around the edges and soggy in the middle from the tomato juices. The spinach we think might have been frozen and not fresh - the amount of liquid that it was sitting in, was what you get when you cook it from frozen and all the ice melts! And the squid was a little tough and certain parts were still really gritty which was unfortunate.

We were slightly disappointed and thought starters were nothing special and were at a standard you would expect to cook yourself at home. We're not usually one for waste or leaving food, but we were happy to leave some leftovers on the plates. Feeling like starters were a bit of a fail, we were hoping the main would make up for it... 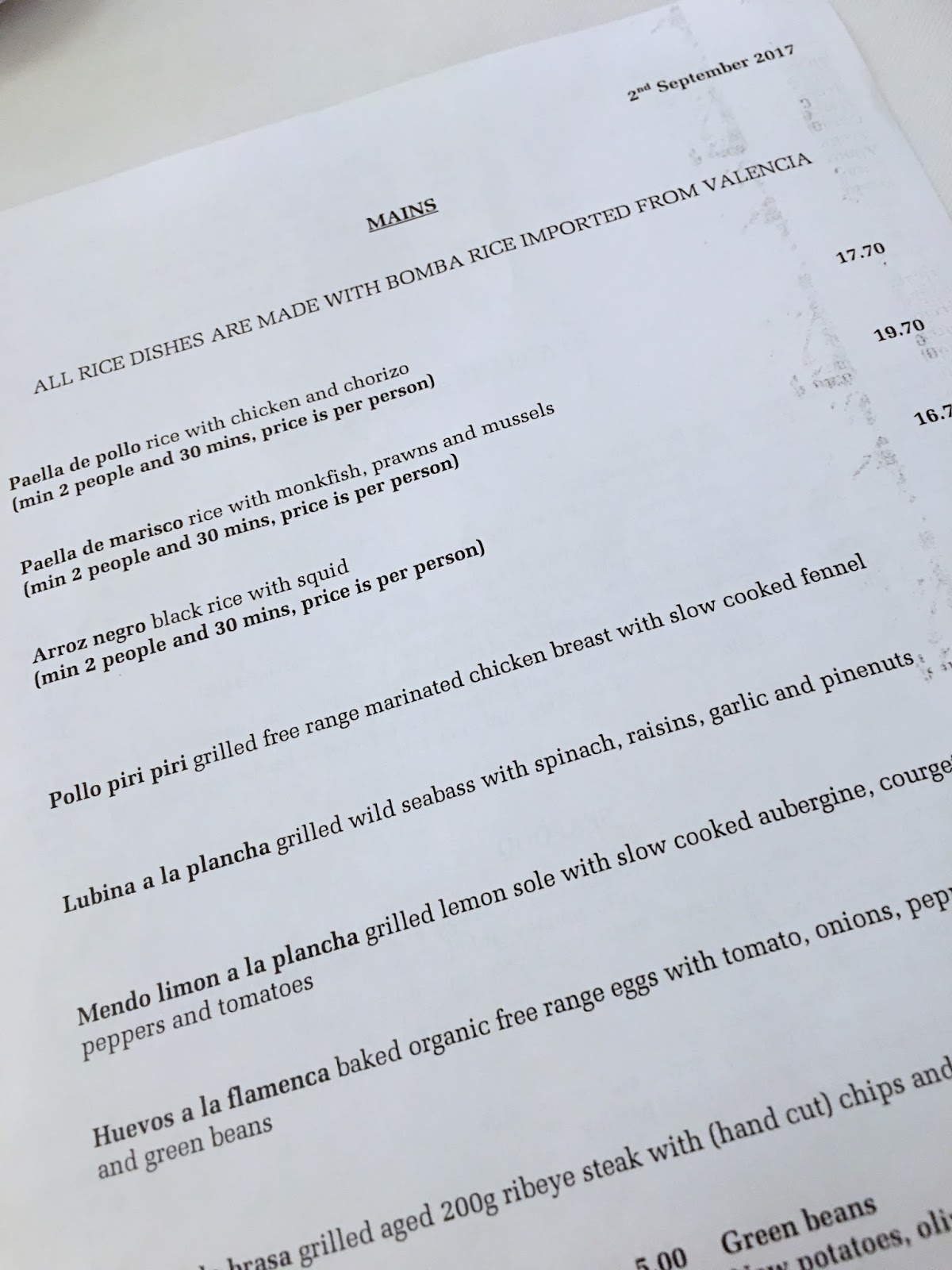 For our main, being a Spanish restaurant it would have been rude not to have chosen Paella. Unfortunately, Terry isn't too keen on seafood, so we went for the chicken and chorizo Paella instead. The prices for this main start at £17.70 per person depending on if you're having meat or fish. The dish was huge and as you can see from the photo full of so much colour and we were pretty excited to tuck in.
The Paella was nice and made a nice change compared to the start of the meal. Although, considering the price of the dish there was not much meat in it. Luckily neither of us are huge meat eaters and it didn't bother us too much, however, we didn't feel it reflected the price. 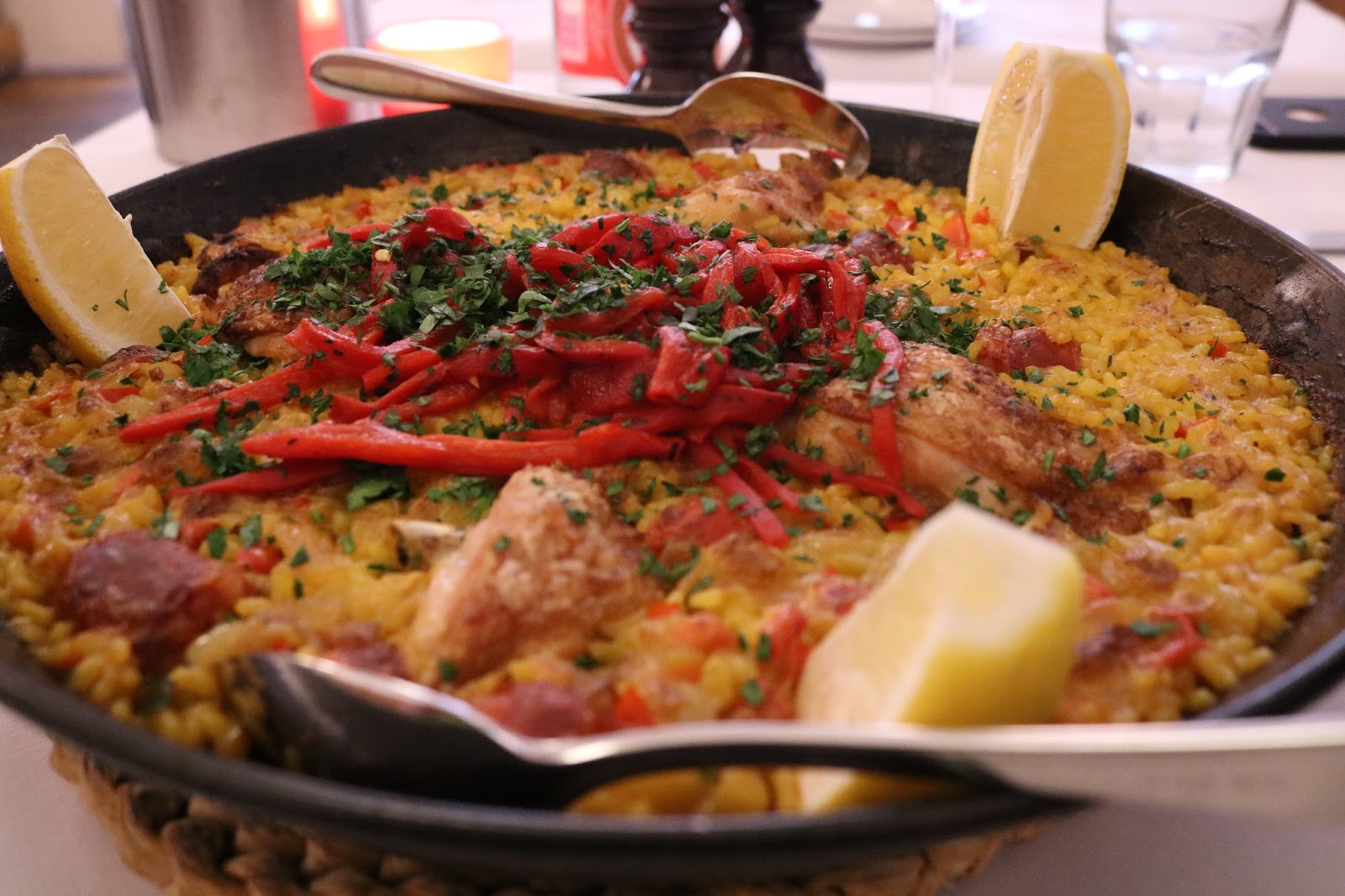 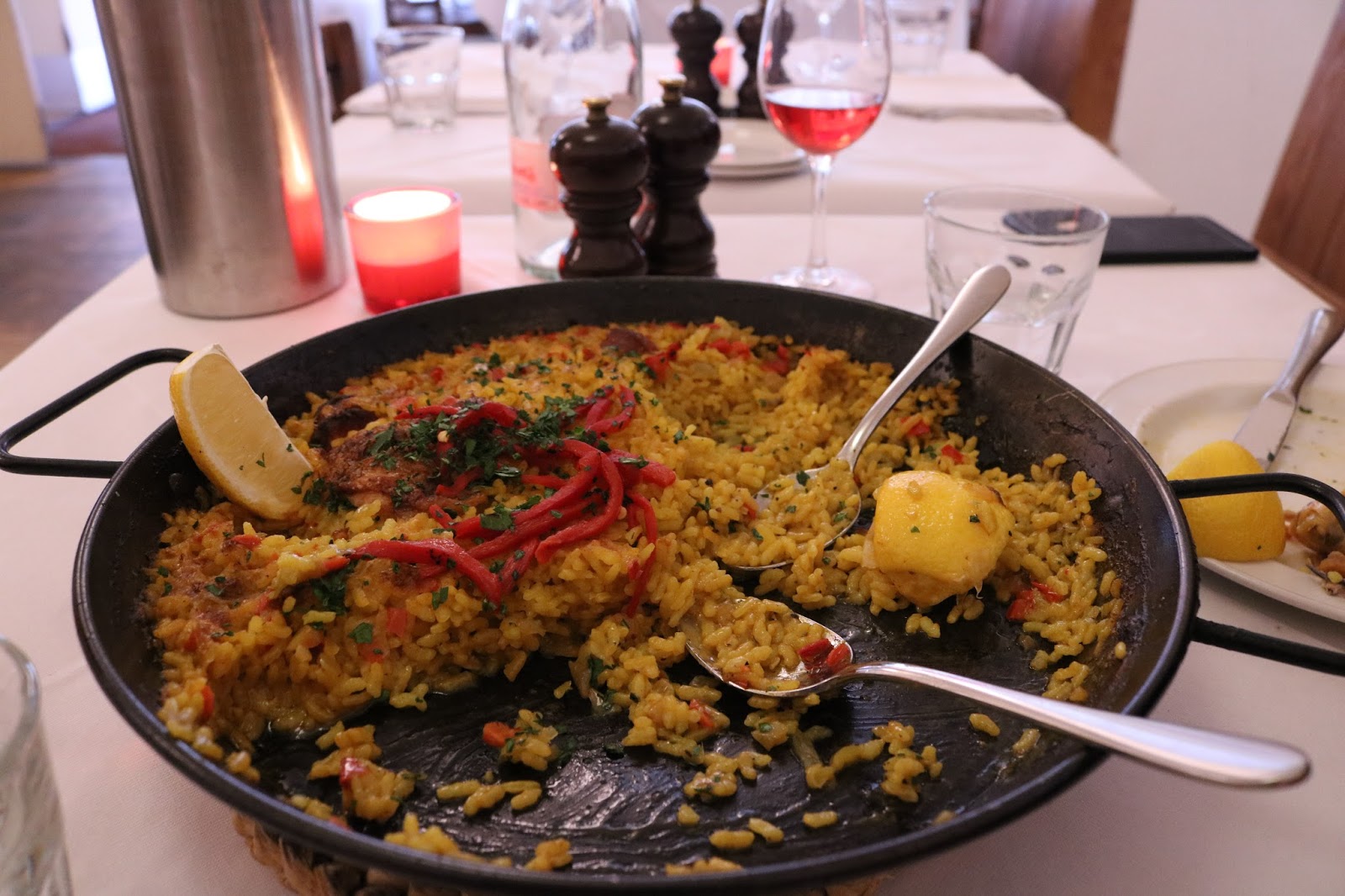 We couldn't finish it all and cheekily asked to take it home which they had no problem with and kindly packaged it up for us to take. After having a breather and allowing our dinner to go down for a bit, we decided to try dessert. Terry wasn't overly impressed with his and although the description said 'poached fruit' all he got was a poached pear. The sauce it was in was nice and reminded me of mulled wine and Christmas flavours, but it was quite a strong and overpowering taste for dessert. I, however, was pleasantly happy with mine as I went for a chocolate tart. It was actually really good and probably the best part of the whole meal! Safe to say Terry was a little jealous of my selection compared to his. 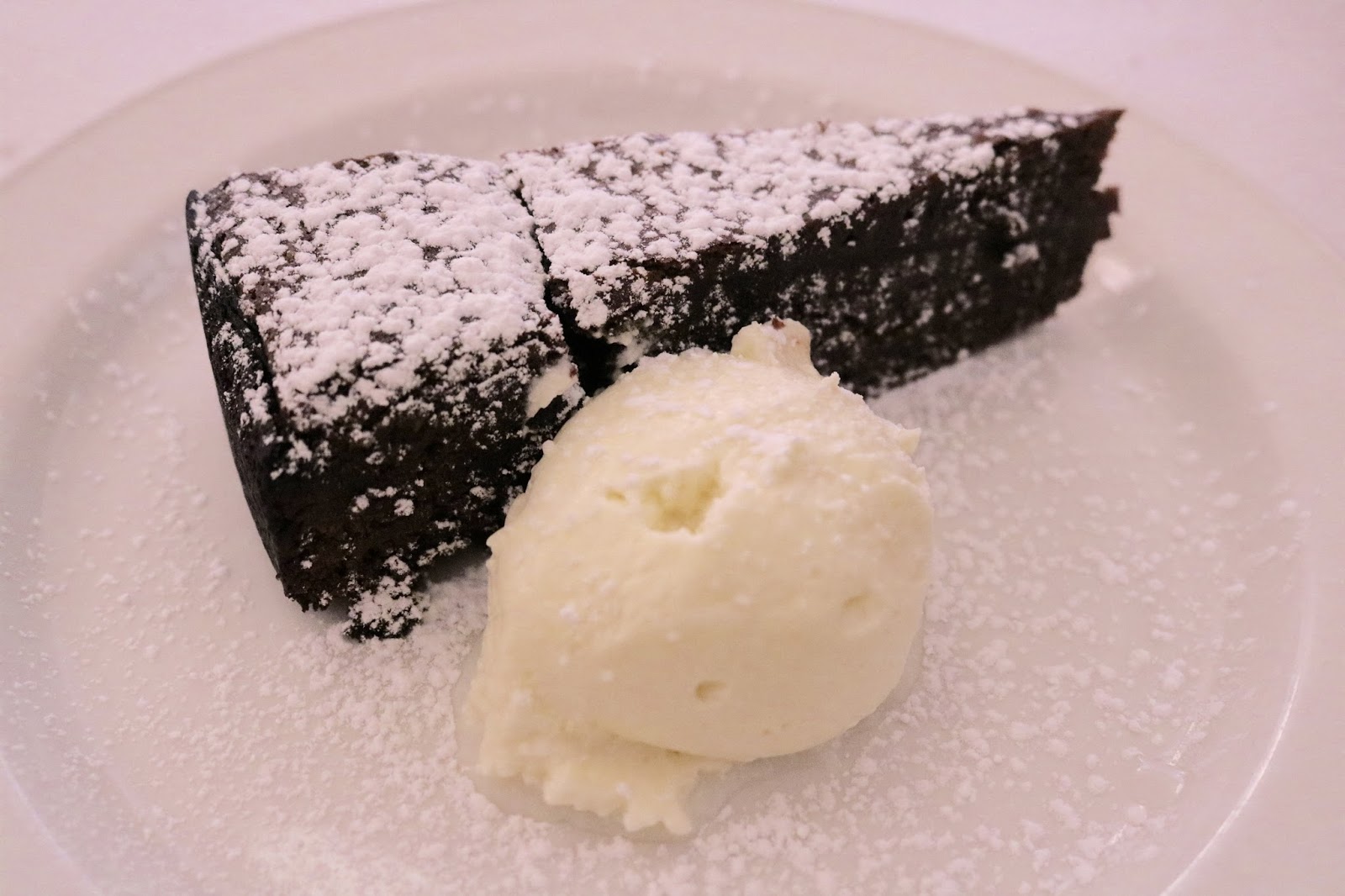 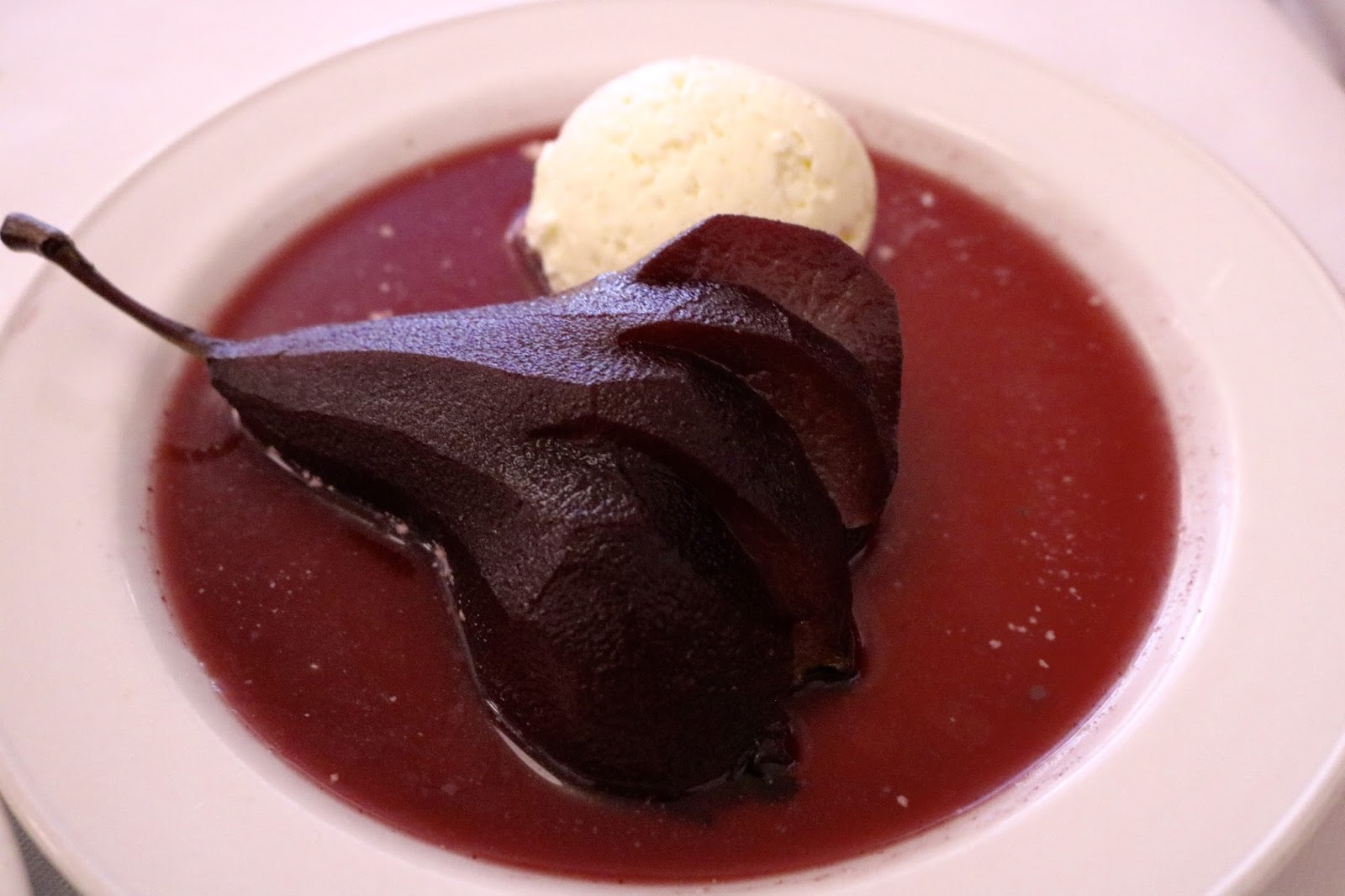 So let's move on to the actual restaurant and the atmosphere. Well, to be honest, there wasn't any. In fact, there is nothing inside that would make you realise you were in a Spanish restaurant. Plain magnolia walls. Plain white tablecloths. Actually sorry they weren't even tablecloths, they were those paper-like sheets you just dispose of after they've been used once. The toilets were dark and not very functional. There was no Spanish music; no music at all in fact. No plants. No Mediterranean tiles anywhere. It was lifeless and dull. So much potential and yet the whole venue needs a serious makeover in my opinion. 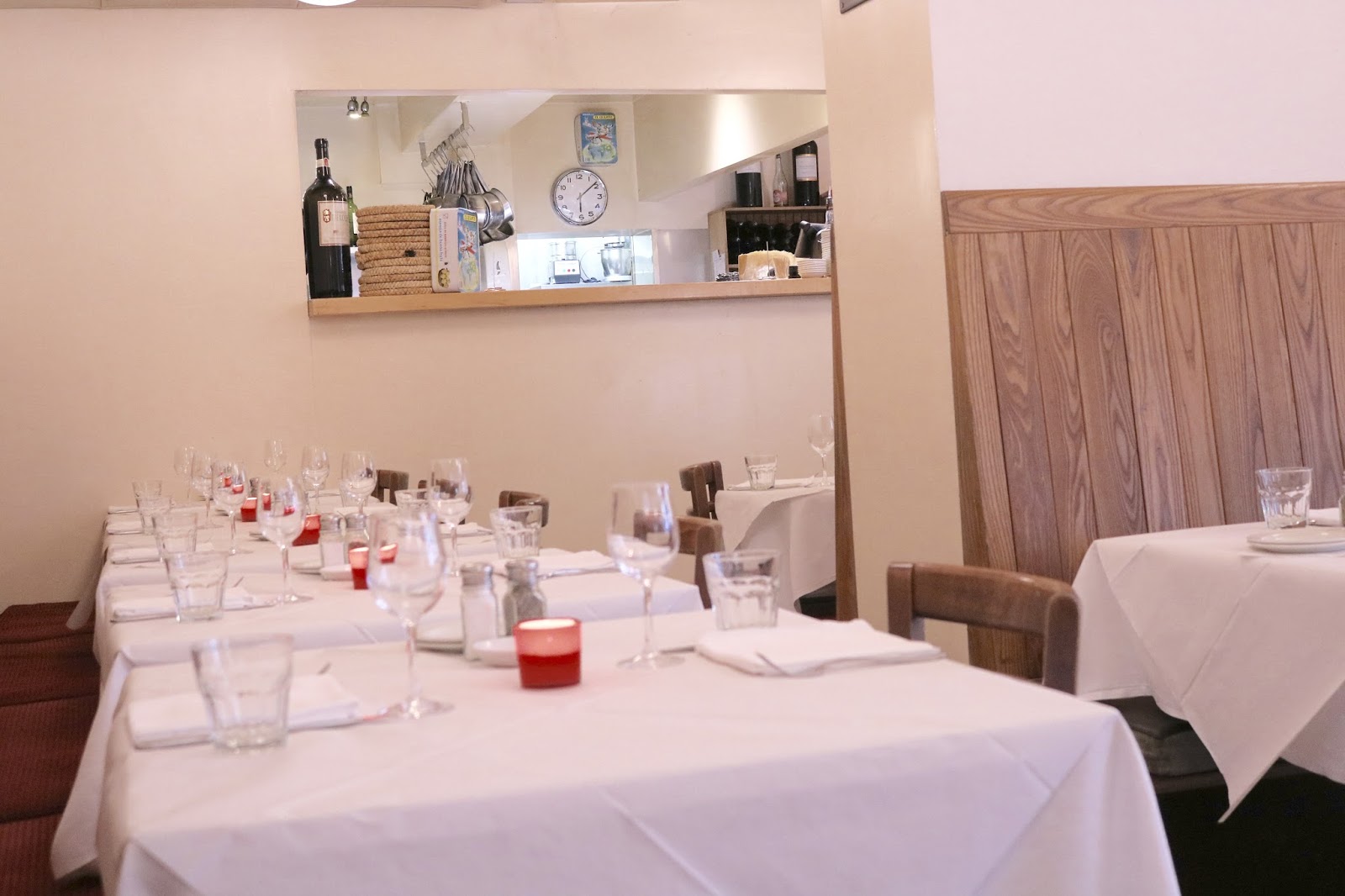 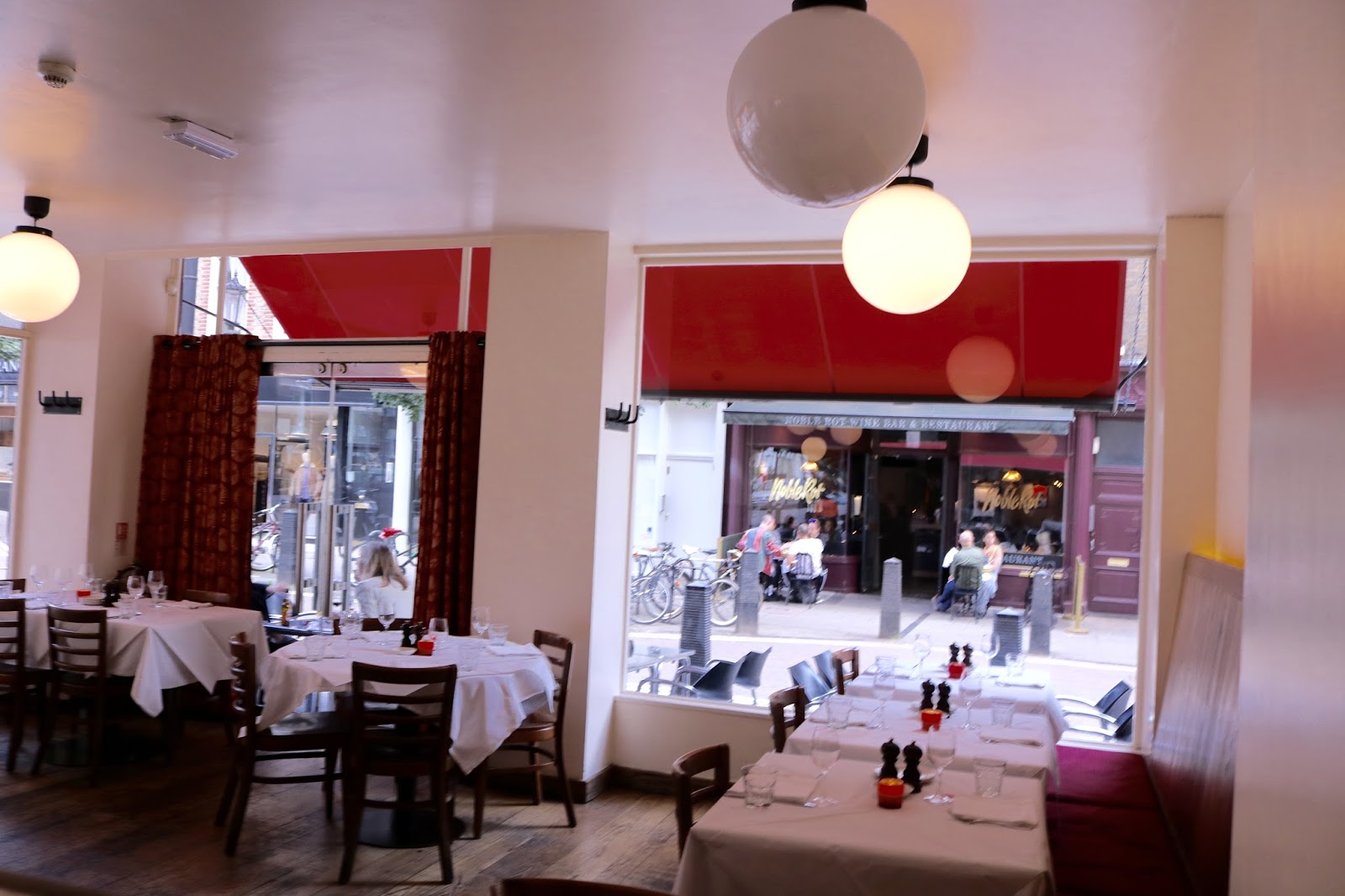 My overall verdict? Unfortunately, I won't be recommending Cigala in hurry. Compared to all the positivity they give themselves on their website, the restaurant was nothing like we hoped or expected. I don't like writing negative posts or reviews and it's not always easy, but I like to be 100% honest with my readers and sometimes it just has to be said how it really is. Maybe we just caught on a bad day?

I'd love to know if you've ever been to Cigala and maybe had a completely different experience to the one we had?
*We received a complimentary meal at the restaurant mentioned in this review, however, all views, opinions and photos are my own and must not be used without my consent.