Saturday, 15 October 2016
2016 has been a year that I've been glued to my laptop screen. Forget Eastenders.. I've been finding out who A is and getting all the juicy gossip from Litchfield. Seriously, where have I been that I'd only found out about some of these shows, into their 6th year! Shocking really.


Don't worry, I won't be giving away any of the secrets in the post. Theres nothing I more I hate, than someone spoiling a show for me. Like really? Thanks for being that person!
Before I talk about the shows I've been loving, I must warn you that they are very addictive. I won't take responsibility for the hours you are about to loose glued to your TV. I say that as I sit here wrapped up in my blanket, having just finished another series until next year. Ergh! Desperately trying to find the next show to feed my addiction!

So lets talk about the two most popular shows, that I'm sure you've all heard about. Pretty Little Liars (PLL) and Orange Is The New Black (OITNB). I don't think I really need to say much about these two. They are by far the most talked about amongst bloggers and well Twitter in general seems to go mad when the new season starts! I wrote a post about these two when I first started watching them, which you can find HERE, although I may do an updated version soon. 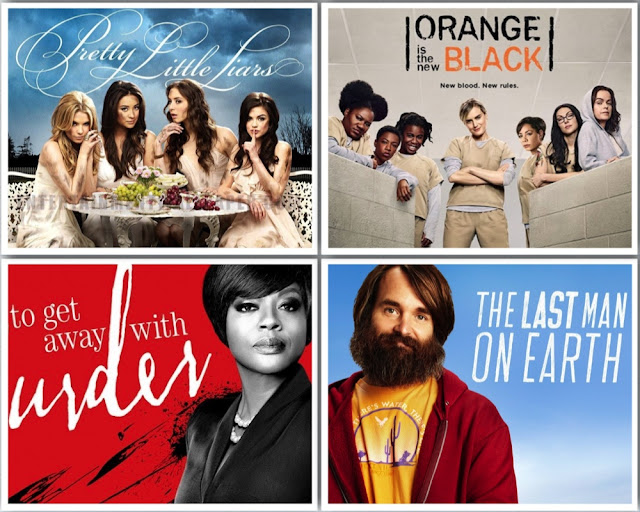 Moving on, I wanted to talk about How To Get Away With Murder (HTGAWM). It's been running since 2014 and currently into its third season. I'm still half way through the second, but its a great show. Annalise Keating is one o the top defence lawyers, who also teaches at a university. She hires a group of 5 interns from her class to work with her and her team. Here they have unusual cases that come their way and they learn how to defend their clients. They also learn, how to get away with murder.

One thats not as serious and just something light-hearted that'll help pass the time if you're bored, is Last Man On Earth. I wasn't too sure at first and I admit, its really not the best, but it had me watching one after another to see what happened next. As the title suggest, Phil was the last man on earth after a disease killed off everyone else. This is a good one if you haven't got loads of time. Each episode is about 20 minutes long.

I have more to share, but due to the length of the post, have decided to split the post into two. Keep your eye out for later in the week, when I'll be sharing my other favourites.

What series have you hooked? I'd love to hear your suggestions.